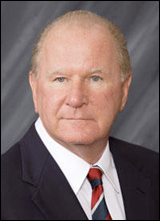 Statement about running for governor: The TCF Bank CEO has been mentioned as a possible candidate, but the former head of the state Republican Party has joined Rep. Marty Seifert’s gubernatorial campaign as finance chairman. – Star Tribune, June 23, 2009

Key issues and priorities: Cooper has criticized proposed legislation of the financial industry. And in a recent interview with Twin Cities Business magazine, Cooper said TCF Bank returned money given through TARP legislation because of the stigma attached to financial institutions that received the money.

“TCF announces the second coming of its highly quotable CEO”

“The life of Bill Cooper”