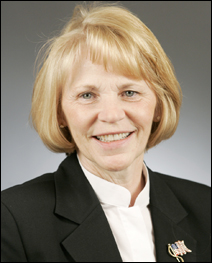 Statement about running for governor:  “I have not made a final decision either for or against it at this time.” — Star News, June 5, 2009

Key issues and priorities: Kiffmeyer has been an advocate for voter ID laws to prevent fraud. According to her campaign website, Kiffmeyer’s top issues include personal freedom, low taxes and limited government.

“One citizen, one vote, one form of ID?”

“Kiffmeyer overpaid herself and her staff, audit finds”