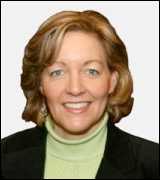 Latest statement about running for governor: Jeffers has been mentioned as a potential candidate, although she has not made any public comment on running.

Key issues and priorities: Jeffers said she ran against Gov. Tim Pawlenty in 2006 because he had disappointed her in balancing the budget by raising the tax burden on property owners while claiming he wouldn’t raise taxes. Aligned with Ron Paul’s candidacy for president last year, Jeffers is a champion of limited government.

Political experience: Jeffers briefly ran against Pawlenty in 2006, and was successful in identifying the disenchanted conservatives with a more libertarian bent. She has been a key organizer of the Ron Paul campaign in Minnesota that has played a role in the battle for state party chair. Some political observers argue that Jeffers could have enough support to swing the endorsement one way or another.