My life has been shaped by people who told me “no.” It started when my own mother told me I should not beat the boys in the games we played as children. My high school guidance counselor told me not to major in anything except education or nursing. My first boss told me women could not be promoted because they might get pregnant.

All of this well-intended advice produced a woman who loves to win, who has a degree in marketing from the University of Illinois and who changed careers until she found a line of work where what she produced was more important than the fact that she is female.

My first job out of college was writing the Sears Roebuck catalog. I went from there to the Promotion Department of the Chicago Daily News, where my job was to hang around the City Room looking for things we might promote so we could sell a few newspapers. I quickly realized that the reporters and editors were having a lot more fun with their jobs than I was with mine, so I asked the managing editor for a job. He said “yes.”

A few years later my husband and I moved to Minneapolis. I arrived in town with tons of Chicago-based freelance work but quickly missed the news business. My first job in Minnesota was with the Sun Newspapers, where I produced four Minneapolis weekly neighborhood papers while working out of an office in Fridley. I was the entire staff for those four newspapers. 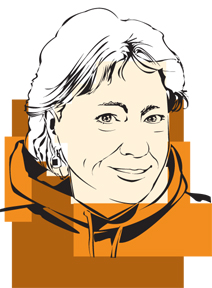 Then I made another career shift. Ron Handberg hired me as a writer for WCCO-TV. I made him promise that I would not have to “be on television” because I was a serious journalist and serious journalists did not appear in front of cameras. Then Susan Spencer, a reporter who was “on television,” took me aside and explained the difference between her salary and mine. We did the same work. She was on television. She made almost twice what I made. I suddenly wanted nothing more than to be “on television.”

Minneapolis City Hall was my ticket to an on-air job. Most days I could find a story at City Hall and we could get it on the air faster if I was the on-air reporter. I had my foot in the door.

The door opened for a career that included a reporting stint in the Chicago Bureau of CBS News, Minnesota Public Radio, Twin Cities Public Television and the University of St. Thomas. The final irony is that the teaching career I worked hard to avoid was one I cherished.

I spent 19 years trying to teach college students to write and ask questions. Some learned. Some whined. Together we all moved forward. Those kids shaped me and challenged me more than they will ever know. For that career and those students I am forever grateful.

So now it’s back to Minneapolis City Hall. And a new adventure.

Back to covering Minneapolis City Hall — and a new adventure