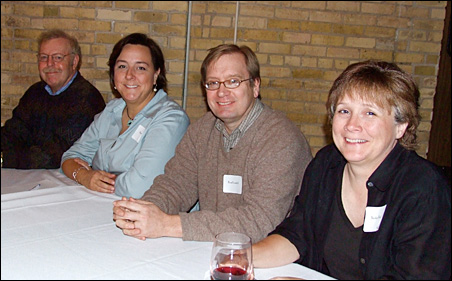 The official MinnPost staff team won round one of the Trivia Battle of the MinnPost Brains by a bare half point. They scored 19.5 (out of a possible 25.5). Congrats to news editor Don Effenberger, co-managing editor Susan Albright, office manager Gin Kujawa and writer Joe Kimball.

The official MinnPost members team — Brad Lundell, Sheila Smith, Becky Beyers and Marshall Tanick — scored 19. (They earned their spots on the team by scoring well in a prelim round and rounding up the most votes in an online election.)

Many of the 175 or so party-goers formed teams to participate in the trivia battle. Audience team scores ranged from a high of 17.5 to a low of 1.

Before you scoff, try your luck below.

The highest-scoring audience team was Sarah’s Stars. The Stars turned out to be Eric Black, David Brauer and two other celestial members of the Brauer family named Sarah and Abigail.

For the record, even though they did not move on to round two: The next highest-scoring audience team was B.D. Nelson and the Nickelodeons with a score of 17.

In round two, eight bonus questions based on obscure personal info submitted by MinnPost journalists, the official staff team got two right and the other two teams were left in the dust. Luckily, the extra four points did not change the outcome.

Thanks to Trivia Battle emcee and MinnPost humorist-in-residence Uncle Al Sicherman for writing the round one questions. They are listed below with their answers and Al’s commentary. Party photos by Jana Freiband are below. If we got your name wrong, let us know.

Round one questions, answers and associated drivel by Al Sicherman

Frank. Frank Sinatra Jr. had a guest spot playing himself on “The Sopranos,” in a role in which the character Paulie Walnuts referred to him as the “Chairboy of the Board.”

2) The word “dust” appears 24 times in the first four pages of this book.

3) What designer is credited with popularizing the “little black dress?”

Coco Chanel. She died in 1971.  She was the only person in haute couture to be named one of Time magazine’s 100 most influential people of the 20th century.

Harvey Milk. Milk also was one of that Time magazine 100. The article described him as the first openly gay man elected to any substantial political office in the history of the planet.

5) This household appliance was promoted in advertisements starting in 1973 by the famous former husband of a major movie star.

Mr. Coffee. (Half a point for Joe DiMaggio and not listening carefully to the question.) The just-retired Joe DiMaggio married Marilyn Monroe in January 1954. She filed for divorce on grounds of mental cruelty 274 days after the wedding. He never remarried, arranged her funeral in 1962, and had a half-dozen red roses delivered 3 times a week to her crypt for 20 years. After that he apparently said the hell with it.

6) Name the book whose first line is “All children, except one, grow up.”

Peter Pan. Peanut butter used to be gritty. In 1922, a guy named Joseph L. Rosefield began selling peanut butter that was churned like butter so it was smooth, and because the oil didn’t separate from the peanut butter it would stay fresh for up to a year.  One of the first companies to adopt this new process was Swift & Company which in 1928 renamed its product Peter Pan. In 1932, Rosefield had a dispute with Peter Pan and began producing Skippy peanut butter.

7) A best-selling 1960 children’s book was written because the publisher bet the author that he couldn’t write a book with a total vocabulary of 50 words. What’s the title?

Green Eggs and Ham. The editor was Bennett Cerf, publisher and cofounder of Random House and panelist on “What’s My Line?” He was bigger than a breadbox.

8) Who has scored the most career touchdowns in Super Bowl games?

9) The trust that funds a boarding school for underprivileged students, which opened 100 years ago, owns the controlling interest in what major company?

10) This 1957 hit by Patti Page was later recorded by Bette Midler and Jerry Vale, among others.

Old Cape Cod.  [[I was distracted from reading the following drivel by Doug Grow’s request that I sing “Old Cape Cod.”]] Patti Page has sold more than 100 million records in her career, making her one of the biggest selling female recording artists in history. Other hits include “Mockin’ Bird Hill,” “I Went To Your Wedding,” “Mister & Mississippi,” and of course “Tennessee Waltz” which sold more than 20 million copies. Today (November 8) is her birthday; she just turned 82 and still performs occasionally.

11) The Turkish military and militant members of this ethnic group have clashed along Turkey’s southeastern border.

Kurds. There are by one estimate 100,000 Kurds in the United States. For reasons that can’t possibly be explained, the biggest concentration of Kurds in America (10,000 to 15,000) is in Nashville, Tenn.

12) One of the members of a now-defunct all-girl singing group won over an audition panel in 1993 when, asked her age, she replied: “I’m as old as you want me to be. I’ll be 10 with big boobs if you want.” What was this group?

Spice Girls. It was Geri Haliwell — Ginger Spice. I always felt that that group needed a baritone. I wuz gonna call myself “Old Spice.”

13) The strongest earthquake ever recorded, a 9.5, hit this Western Hemisphere country in 1960.

Chile. This is not the quake with the largest death toll; just the strongest quake. For modern times, the 9.3 Sumatra Andaman earthquake and tsunami in late 2004 is now estimated to have claimed 275,000 lives.

14) Name the impure mixture of uranium oxides obtained during the processing of uranium ore.

15) This nobleman was lord of the admiralty and principal supporter of Captain Cook’s Pacific exploration, and was honored when Cook named a group of islands for him. Who was he?

The Earl of Sandwich. John Montagu, the fourth Earl of Sandwich, is remembered for sponsoring the voyages of discovery made by Captain James Cook, who named the Sandwich Islands (later Hawaii) in his honor. He is also the namesake of the sandwich. It is said that he ordered his valet to bring him meat tucked between two pieces of bread, because it allowed him to continue playing cards while eating meat, without getting his cards greasy.

In a famous exchange with dramatist Samuel Foote (which I have edited slightly for best effect), Sandwich declared, “Foote, I have often wondered what catastrophe would bring you to your end; but I think, that you must die of either the noose or the pox!” Foote replied “That will depend upon whether I embrace your lordship’s principles or your lordship’s mistress.”

DoubleMint gum. Joan got pregnant (had a bun in the oven).

17) South Carolina has two Republican senators; their first names are Lindsey and Jim. Last names, please. (Get both or get no points.)

18) This soccer player has more international goals than any other player in the history of the sport.

Mia Hamm. 154 goals. Hamm was born with a club foot, and had to wear corrective shoes as a toddler.

19) What was Anthony McAuliffe’s famous one-word reply to a military ultimatum?

Nuts. It was a reply to a five-paragraph demand for surrender, from the German commander encircling the town of Bastogne. (In full, General McAuliffe’s reply was: “To the German Commander, NUTS! The American Commander.” It was typed and delivered to the German delegation by Colonel Joseph Harper, commanding the 327th Glider Infantry. Harper had to explain to the Germans the meaning of the word “nuts,” telling them that it meant “Go to hell.”

20) Each title in the series of books about this New Jersey native contains a cardinal number. Name the person.

Stephanie Plum. Janet Evanovich’s Plum is a bounty hunter in a blue-collar pocket of Trenton where (as she says) houses are attached and narrow, cars are American, windows are clean, and dinner (God forbid you should be late) is served at six.

21) In 1930 Ruth Wakefield cut up something and unintentionally invented a popular baked snack. What was this now-ubiquitous treat?

Chocolate chip cookie. Wakefield and her husband owned a tourist lodge in Whitman, Mass., named the Toll House Inn. One morning Wakefield was mixing a batch of chocolate cookies for the guests when she discovered that she was out of cocoa powder. She substituted broken pieces of a Nestle’s semisweet chocolate bar, expecting it to melt into the dough to create chocolate cookies. That didn’t happen, but the cookies were terrific. She called them “Toll House Crunch Cookies.” They became extremely popular locally, and the recipe was soon published in a Boston newspaper. Nestle noticed increased sales of its semisweet chocolate, and soon won an agreement with the Wakefields: Nestle got to print the Toll House Cookie recipe on its package, and the Wakefields got . . .  a lifetime supply of Nestle chocolate.

22) In the pilot of this actor’s TV series, his twin boys were named after his real twin sons, but the TV twins’ names were changed in subsequent episodes. What’s the actor’s name?

Ray Romano. Romano grew up in Queens and graduated from Hillcrest High School in 1975 in the same class as Fran Drescher. Before breaking into show business, Romano attended Queens College, where he majored in accounting and made it to the Dean’s List for three years.

23) Name the painter whom critics have called “Jack the Dripper.”

Jackson Pollock. Pollock grew up in Arizona and Chico, Calif. Expelled from one high school in 1928, he enrolled at Los Angeles’s Manual Arts High School, from which he was also expelled.

24) The singer/guitarist with this band is the only person ever to be inducted into the Rock and Roll Hall of Fame three times and is credited with popularizing the use of the wah-wah pedal.

Cream (Eric Clapton). Clapton has been inducted into the Rock and Roll Hall of Fame as a member of the Yardbirds, of Cream, and as a solo performer. (Wah-wah!)

25) What board game has a Queen Frostine card?

Candy Land. You may be saddened to note that the character Plumpy was removed in 2002.