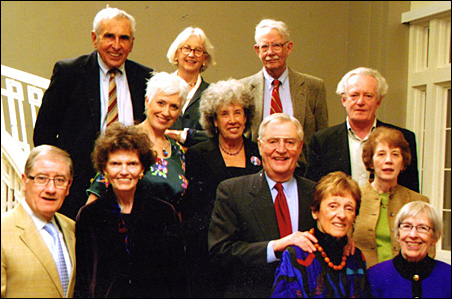 Sandy’s election eve gathering in 2008 was held at the Calhoun Beach Club. Sandy is in the front row, second from left, between Guthrie director Joe Dowling and Vice President Walter Mondale.

Sandy Hale, a founding member and enthusiastic supporter of MinnPost, died on Election Day. She had voted absentee four days before she died.

Elections were important to her and the people she knew best. She liked to invite friends for dinner the night before Election Day so they could write down their predictions. It was a competition to see who could come closest to the eventual results.

Even as her health declined, she attended MinnRoast, MinnPost birthday parties and other events. Tonight, at MinnPost’s 3rd birthday celebration, we will miss Sandy. We know she would have wanted to be there.