We are pleased to announce that Devin Henry will be MinnPost’s Washington correspondent.

Devin has been working as our interim Washington reporter since June, when Derek Wallbank left the job to work for Bloomberg News. 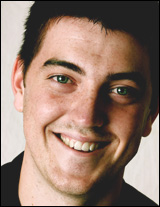 Since then, Devin has done a terrific job covering many of the important stories out of Washington, including, mostly recently, the bitter debate over raising the debt ceiling.

Devin has demonstrated that he has the skills and background to provide high-quality coverage of issues that are important to Minnesota readers. He is a graduate of the University of Minnesota, and while at the university he was editor-in-chief of the Minnesota Daily. The Daily was named the best daily student newspaper in the United States by the Society of Professional Journalists under his leadership.

Devin has been an intern at Minneapolis-St. Paul Business Journal, the St. Paul Pioneer Press and MinnPost.com. He can be reached at dhenry[at]minnpost [dot]com. You can also follow him on Twitter.