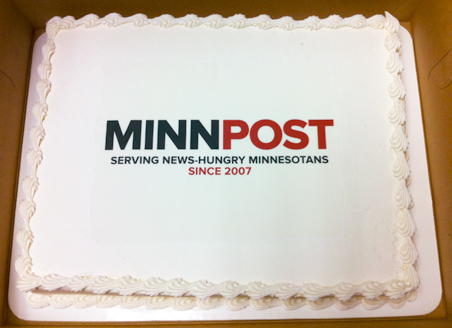 At its 4th birthday party Monday night at Solera, MinnPost gave the 300-plus guests a sneak peak of what our home page might look like starting in February.

Kaeti Hinck, MinnPost’s news technology director, explained that we’ll be moving MinnPost onto an open-source Drupal platform and redesigning the site at the same time. For the redesign, being developed with Gorton Studios, Kaeti said, “we kept a few main goals in mind: make content more discoverable, make future changes to the site easier and less expensive, and finally, make it attractive. In conjunction with those goals, we also chose three words to inspire the design: bold, nimble, and open.”

We’re not going to publish the page we showed the partiers Monday night, because it’s an early-stage work in progress. But our new logo, designed by MinnPost’s web editor, Corey Anderson, is pretty much set. So here it is:

Also at the party, the fourth annual edition of the Best of MinnPost.com made its debut.

The 48-page publication highlights many of our biggest and best stories published during 2011, including coverage of Minnesota’s state government shutdown and our Washington bureau coverage of the budget fights in Congress. 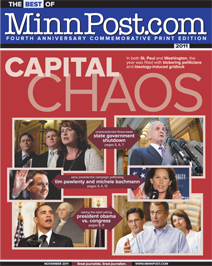 Copies of BOMP are available during business hours at the MinnPost office at 900 Sixth Ave. SE, #220, Minneapolis. You can get copies for individual use, or take bundles for your workplace or high-traffic locations where you hang out.

This edition of Best of MinnPost also includes a crossword puzzle by MinnPost CEO and Editor Joel Kramer. If you solve it correctly and mail it in by Nov. 30, you’ll be entered in a drawing for two $100 vouchers for Minnesota Opera tickets.

Online versions of BOMP stories can be viewed here.

MinnPost shows off a new logo on its 4th birthday