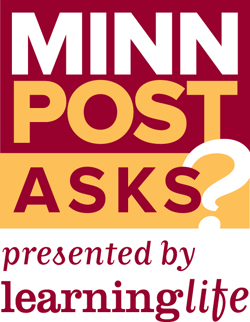 Thursday, April 12, marks the launch of MinnPost Asks Presented by LearningLife, a new series produced by MinnPost in partnership with the U of M’s College of Continuing Education.

The bi-monthly series will focus on hot-button issues, addressed by one or two newsmakers, a MinnPost journalist, and a U of M faculty expert. A moderated public Q&A will follow each panel’s discussion.

For the April 12 kick-off event, The Marriage Amendment: The Meaning Behind the Messages, Richard Carlbom, executive director of Minnesotans United for All Families (the anti-amendment coalition), will be interviewed by MinnPost journalist Beth Hawkins and University of Minnesota Communications Studies Department Chair Ed Schiappa.

The discussion will focus on messaging being used in Minnesota and elsewhere by groups fighting for and against the amendment. Video clips will be shown and analyzed.

Said Margy Ligon, director for the College’s personal enrichment programs, “This format will allow people to hear about the issues from several angles. The newsmakers, obviously, and then the journalist and the faculty member who will be serving in the ‘interviewer’ roles. The reporter will typically tackle the issue from the ‘right now’ perspective — he or she will have the latest information and breaking news on the topic. The professor offers a historical perspective and brings the academic insight.”

“The goal is to gather experts and newsmakers together for a real discussion, for a civil debate on the issues. We want to tackle those issues from a local level, and see how they are affecting our region and our lives.”

Joel Kramer, CEO and editor of MinnPost, said about the partnership with LearningLife: “We encourage civil discussion from many points of view — as does LearningLife. Our audience cares about Minnesota — as theirs does. Together, we’ll combine the resources of a high-quality news site and a great university, for the benefit of a wider community.”

Tickets are $25 ($15 for MinnPost and Learning Circle members). All events will begin at 7 p.m. and will be held at the Continuing Education and Conference Center on the U of M St. Paul campus. Seating is limited. Call (612) 624-4000 or click here to purchase tickets.

‘The Marriage Amendment: Meaning Behind the Messages’ kicks off new series