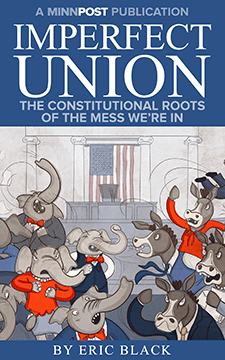 You probably read some or all of the provocative series of articles by Eric Black called “Imperfect Union: The Constitutional Roots of the Mess We’re In,” which MinnPost published during the final three months of 2012. Now, for just $1.99, you can buy the e-book.

In the book, MinnPost’s national correspondent argues that the U.S. Constitution contributes to gridlock in Washington and other structural problems with our politics, giving us a Congress and a Presidential election process detached from the principle of one-person, one-vote, an unelected Supreme Court with extraordinary power over both the laws and how the political system works, and an amendment process that makes it almost impossible to change the two-century-old words that drive our system.

The e-book, priced at $1.99, is available now on Amazon for the Kindle and Kindle apps.

In the next few weeks, the book will be available from the iBookstore, Barnes & Noble, Sony, and other sellers. Check MinnPost’s e-book page for updates and more buying options.