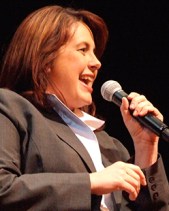 In her 2011 appearance at MinnRoast, then-Senate Majority Leader Amy Koch danced with Sen. John Marty and brought down the house with a sharply-worded, humorous monologue. Want to know what she’s doing this year? Buy a ticket to MinnRoast, Friday, April 26, at the Pantages.