The autographed soft football punted by Vikings punter Chris Kluwe from the stage of MinnRoast 2013 has been recovered from the upper cove of the Pantages Theatre ceiling.

And this piece of MinnRoast history is now up for auction.

Bids may be submitted by email to lkramer@minnpost.com. Deadline: Monday May 6 at 12 noon Central Time. There is no minimum bid. The highest bidder will be notified by email later on Monday.

The punt was part of Kluwe’s intro to the roast of Minneapolis Mayor R.T. Rybak.

JoJo Liebeler, MinnRoast producer/director, had asked Kluwe to punt the football. “I watched from the wings as it LODGED — impossibly! — into a piece of crown molding high up where the stained glass ceiling piece is.” Thanks to Steve Olson, Pantages Theatre Operations Coordinator, for the skilled rescue.

Put “Kluwe” in your email subject line, your bid in the message and let the bidding begin.

Editor’s note: All auction proceeds will go to support MinnPost, a tax-exempt 501(c)(3) nonprofit offering high-quality journalism for people who care about Minnesota. 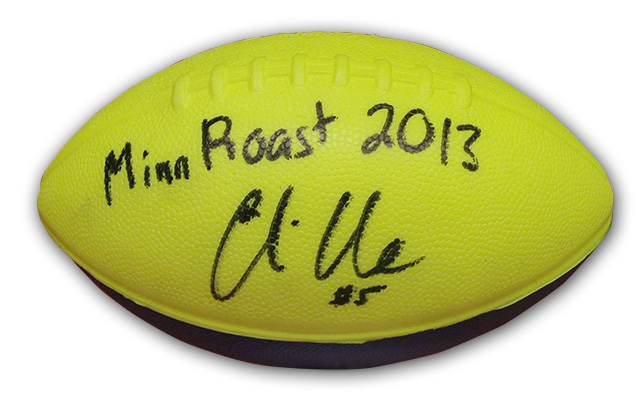 Kluwe-punted football recovered from Pantages ceiling; you can own it