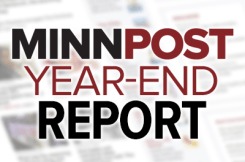 MinnPost made major strides toward sustainability in 2013. For the fourth year in a row, we ran a surplus. This year’s surplus was larger — $118,072 — enabling us to make substantial progress on building our reserves to a more prudent level.

We ended 2013 with $275,755 in cash on hand, our highest total in five years. This should reduce our need to borrow money in the summer, when our revenues are typically low.

In recognition of the increasing size of our operation, and our desire to build revenues so we can invest more in high-quality journalism, we’re looking to fill a new high-level leadership position, Publisher of MinnPost. This person will oversee most of the business-side operations, reporting to Joel, who will continue as CEO and Editor. Laurie will continue to direct our major donor efforts, major events and board relations. Go here for more information.

As always, we give heartfelt thanks to our hard-working editors, technology and business staff, journalists, advertisers, sponsors, Board of Directors, Advisory Council, comment moderators and other volunteers. And extra thanks to all our donors, from Copy Boys and Girls to Media Moguls and beyond.

A note to readers who haven’t yet become donors: Please take that important step in 2014. Ongoing support from our readers makes courageous, independent Minnesota journalism a sustainable reality.

The full text of MinnPost’s 2013 Year End Report, including our donor list for the year, is posted here [PDF]. Please email members@minnpost.com to notify us of errors or omissions. Thank you.