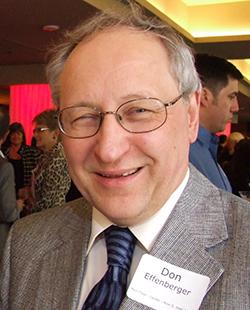 Late Friday afternoon, news editor Don Effenberger will head out the door at MinnPost world headquarters in Minneapolis for the good life of ocean cruises with his wife, Pat, extended time with his family and viewing old films on Turner Classic Movies any time he pleases.

One of MinnPost’s original editors when the site was launched in the fall of 2007, Don is retiring after more than 40 years of journalism in the Twin Cities.

Don will be missed by MinnPost’s staff, its readers and me. (Especially by me. Don did all the work and I took all the credit. Something I learned in management school.)

Don’s a local guy who understands state and local politics about as well as any journalist in town. He majored in journalism at the University of St. Thomas, started working as a reporter and then news editor at the Catholic Bulletin, and later moved on to the St. Paul Pioneer Press and MinnPost.

He’s been our chief political editor for years, as well as handling many other duties, including getting up at the awful hour of 5 a.m. each weekday to edit the Morning Glean. He also wrote our popular Listing Slightly post, a collection of quirky, quick-read lists on everything pop culture from movies to music. Over the years, Don wrote, edited and supervised hundreds of articles for MinnPost. In addition to his Listing Slightly work, he says his favorite MinnPost effort was the 2013 “Battle for Control” series on who would control the 2013 Legislature.

One of the joys of sitting next to Don in the newsroom (there are many, including learning a lot of terrific lines from old movies) is to overhear his conversation with a reporter after reading the first-draft of an article. He would usually begin with a sincere compliment, but would invariably get around to saying, in his best Columbo voice, “But I’ve just got a couple of questions…”

And they were always smart questions — questions that clarified a point, challenged a faulty premise or filled a hole in the story. Reporters may have found the inquiries annoying at first, but in the end were glad they were asked because they raised the quality of their articles.

They were questions thoughtful readers would have wondered about as well, but didn’t have to ask because Don was on the job on their behalf.