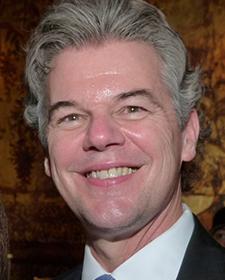 Businessman Jim Graves founded the nationwide AmericInn hotel franchise in 1979. In 1993, he began the luxury Graves Hospitality Corporation with his son, and the Graves|601 Hotel in downtown Minneapolis has been named the only Four-Diamond Hotel in Minnesota. Jim gained larger fame beyond business circles when he challenged Rep. Michele Bachmann during the 2012 election and lost by less than one percent. Jim suspended his 2014 campaign following Bachmann’s announcement that she did not intend to run again. He was recently elected to the MinnPost Board.

Besides his business and political skills, Jim is also a singer and guitarist, and MinnRoast 2014 will be your chance to see him perform on stage.

Also scheduled to appear in our annual song-and-skit variety show: comedienne Lizz Winstead, Gov. Mark Dayton, Sen. Al Franken, Minneapolis Mayor Betsy Hodges, former state Sen. Amy Koch, Cyndy Brucato and more. The variety show begins at 7:30 on April 25 at the State. After the show, there’s a dessert reception for sponsors and their guests just down the street in the Burnet Gallery at Chambers Le Méridien. Rock Bottom Brewery is also offering happy hour pricing on drinks and appetizers after the show.

Below you will find a breakdown of individual ticket and sponsorship categories. We look forward to seeing you at the show.