About 90 people joined MinnPost Tuesday night at Open Book in Minneapolis to discuss how writers, artists, and those with “outsider” perspectives see and experience the Twin Cities with MinnPost columnist Andy Sturdevant.

Sturdevant, a native of Louisville, Ky., said one of the first things that struck him about Minneapolis-St. Paul when he moved here in his mid-20s – apart from the prevalence of stucco – was the orderliness of the cities’ street grids, which to him seemed to stretch on forever.

“It wasn’t until I saw this map of the streetcar system as it was in the 1930s that I really understood why things are the way they are here,” he told the capacity crowd. “These were cities built for and by streetcars. Although the streetcar lines have long since disappeared, you can still see their influence today. … The intersections where they stopped remain commercial centers evenly spaced among blocks of modest single-family homes. That pattern gives a natural, almost musical, rhythm to the cities’ streets.”

The conversation was a part of the MinnPost Social event series, sponsored by RBC Wealth Management, in which our journalists share their insights with the public in a casual atmosphere. The events are free for MinnPost members, $10 for non-members.

The next MinnPost Social, which will preview the upcoming state legislative session, will take place in March. 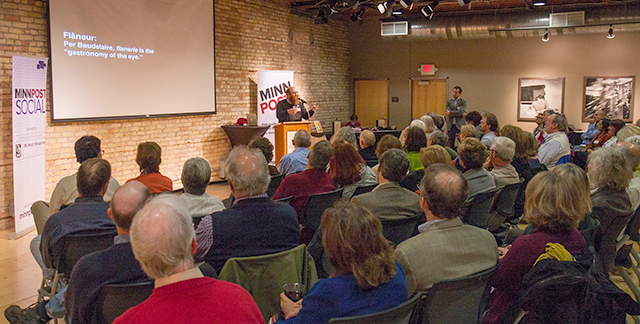 MinnPost photo by Andrew Wallmeyer
The conversation was a part of the MinnPost Social event series in which our journalists share their insights with the public in a casual atmosphere.