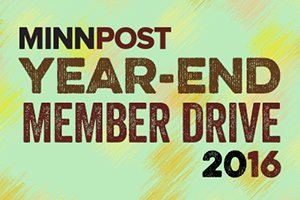 Monday’s announcement of the Knight Foundation’s $25,000 matching grant prompted dozens of readers to make a year-end contribution to MinnPost, putting us almost halfway to our campaign goal.

We still have quite a bit further to go, however, and more than $15,000 to raise to receive the full $25,000 in eligible funds from the Knight News Match.

Any gift will be matched dollar for dollar up to $1,000, and get us closer to our goal.

In addition to this generous challenge grant, readers who become Platinum members by giving at least $20 per month (or $240 at one time) will be eligible for new one-year digital subscriptions to The New York Times.

Many of those who have already contributed took a moment to tell us why they did. Some recent comments are posted below, with permission.

This money was a gift for my boss [Scott Peterson] that my co-workers and I gave him for Christmas. He reads MinnPost daily and strongly supports independent news. A perfect gift for someone who already has everything and doesn’t want more “stuff.” – Molly Murphy, St. Paul

Happy holidays to everyone at MinnPost! Keep up the good work! – Nate Dungan, Minneapolis