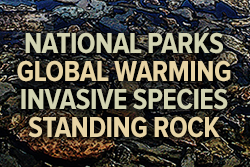 MinnPost’s Earth Journal fundraising campaign enters its second week with over $1,500 raised in support of our environmental coverage.

Many readers have taken the opportunity to join our generous Earth Journal Circle donors in sustaining the column, which was recognized in 2015 as the best independent news blog (on any subject) by the Minnesota Chapter of the Society of Professional Journalists.

This month we’re urging the rest of our readers to join our Earth Journal Circle donors by making a gift in any amount. Support for independent, nonpartisan environmental journalism is now more important than ever.

Here’s what a few of the members who have already contributed during this campaign had to say about why they support MinnPost and Earth Journal:

Now more than ever we need excellence in reporting, particularly focused on the environment. I rely on MinnPost’s balanced reporting to keep me informed on the issues that impact Minnesota today. – Barbara & Mike LaMotte, St. Paul

MinnPost is Minnesota focused, yet covers national and international issues as they pertain to Minnesota.  I can always count on articles to be timely, thorough and thoughtful. – Sheila Ehrich, Farmington

We are grateful for the support of the following individuals and foundations, who have pledged multi-year support in amounts ranging from $1,000 to $5,000 per year since 2011.