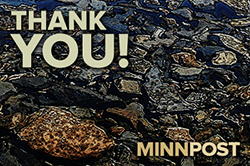 Our Earth Journal campaign ended at midnight last night, with 63 donors having contributed a combined $6,545 in support of the twice-weekly column and MinnPost’s environmental coverage.

To everyone who gave, THANK YOU for your support!

Including the generous gifts received from our Earth Journal Circle donors, MinnPost members have collectively contributed more than $43,000 to sustain our award-winning environmental journalism in 2017.

If you would like to join them in showing your support, it’s not too late to contribute to our 2017 Earth Journal campaign.

Here’s what a few of the members who contributed during this campaign had to say about why they support MinnPost and Earth Journal:

I give to support good reporting. MinnPost has more than just “politics.” – Jerome Jensen, Luverne

I give to support the independence of a free press. – Louise Fowler, Minneapolis

We are grateful for the support of the following individuals and foundations, who have pledged multi-year support in amounts ranging from $1,000 to $5,000 per year since 2011.

Environmental campaign raises over $6,500 in support of coverage