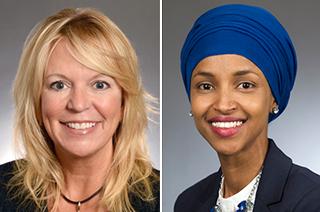 State Sen. Karin Housley and state Rep. Ilhan Omar will be making their MinnRoast debuts during our 10th-anniversary show on Friday, April 28, at the Historic State Theatre in downtown Minneapolis. Republican Housley was first elected to the Minnesota Senate from District 39 (which covers the east metro from Shafer to St. Mary’s Point) in 2012. Democrat Omar was elected by the residents of District 60B in Minneapolis to the Minnesota House last fall. The two lawmakers will be joining the MinnRoast Singers and Dancers for a bipartisan legislative medley.

Multiticket sponsorships – which include a VIP pre-show reception – start at $500 for first-time buyers. MinnPost Gold and Platinum members are eligible for a 25% ticket discount on show-only MinnRoast tickets. To get the discount code, become a Gold or Platinum member by donating $10 a month (or more) and contact Development Director Claire Radomski at cradomski@minnpost.com or (612) 455-6954.