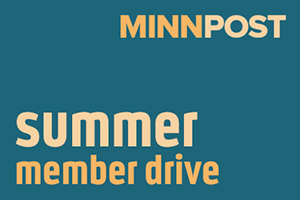 Since the campaign began on June 20, more than 130 readers made generous gifts to support MinnPost, including 57 new members and 24 rejoining members.

To all those who have given, THANK YOU! We want to especially thank the nearly 60 donors who became sustaining members of MinnPost through annual or monthly contributions during this drive.

Readers who wish make a gift in support of MinnPost’s work and to help us reach our campaign goal can still do so.

Below are comments from some of the readers who have given this week, reprinted with permission.

I’ve been reading MinnPost since it started, and figured it was about time I supported the excellent reporting. – Tracey A. Bartlett, Minneapolis

Fact-based journalism and reason-based opinion both matter, at the state as well as national level. MinnPost offers both. – Paul Zorn, Northfield

I appreciate the well researched articles, which give me greater insight into current events. It is a great complement to the newspaper and national news magazines. – Marti Micks, Golden Valley

You do such a good job of reporting beyond what I can expect from other local media. I am happy dedicated journalists are doing this job. – James Mork, Minneapolis

I like the in-depth articles and the local touch. – Don Kleven, Plymouth