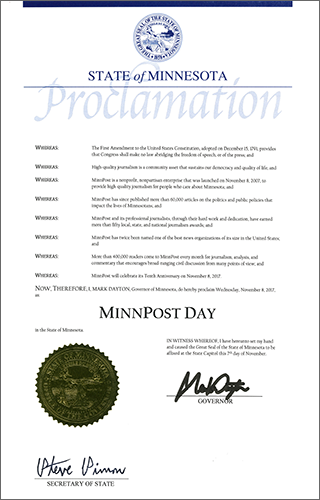 On Nov. 8, 2007, MinnPost officially went live, becoming one of the country’s first digital-first, nonprofit news organizations. At the time, with many newspapers either closing or cutting staff, founders Joel and Laurie Kramer set out to create a sustainable business model for public-service journalism focused on Minnesota.

Thanks to the vision of those who got it off the ground — and the support of thousands of community members — MinnPost can today celebrate 10 years of high-quality journalism, a record that includes publishing more than 60,000 stories; winning more than 50 journalism awards; and establishing a reputation for meaningful, in-depth coverage of the issues that matter to Minnesotans.

MinnPost is now plotting a course for the next 10 years that will significantly grow our audience and our impact. One thing that will not change, however, is our commitment to fostering the kind of informed civic dialogue we believe will ultimately lead to a better and stronger Minnesota.

Thanks to our readers and supporters for sharing that vision — and for giving MinnPost the opportunity to realize it. Happy MinnPost Day.

WHEREAS      The First Amendment to the United States Constitution, adopted on December 15, 1791, prevents Congress from making any law abridging the freedom of speech, or of the press; and

WHEREAS      High-quality journalism is a community asset that sustains our democracy and quality of life; and

WHEREAS      MinnPost is a nonprofit, nonpartisan enterprise that was launched on November 8, 2007, to provide high-quality journalism for people who care about Minnesota; and

WHEREAS      MinnPost has since published more than 60,000 articles on the politics and public policies that impact the lives of Minnesotans; and

WHEREAS      MinnPost and its professional journalists, through their hard work and dedication, have earned more than fifty local, state, and national journalism awards; and

WHEREAS      MinnPost has twice been named one of the best news organizations of its size in the United States; and

WHEREAS      More than 400,000 readers come to MinnPost every month for journalism, analysis, and commentary that encourages broad-ranging civil discussion from many points of view; and

WHEREAS      MinnPost will celebrate its Tenth Anniversary on November 8, 2017.

in the state of Minnesota.