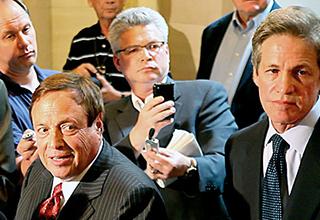 To mark MinnPost’s 10th Anniversary, our writers and editors have dug into the archives to highlight stories that have stuck with them over the years, a series we’re calling 10 at 10.

Today, we hear from Jay Weiner, who chronicled the recount battle between Al Franken and then Sen. Norm Coleman in the days, weeks and months after the 2008 election.

Here’s what Jay had to say about that experience:

So, MinnPost editors Don Effenberger and Roger Buoen sat me down and asked me if I’d be willing to help cover this Al Franken-Norm Coleman recount for “the next couple of weeks.” I was, essentially, a sports writer, but always eager for new things. Because I really like Don and sort of liked Roger, I figured, “Sure, what’s a couple of weeks?”

Turns out those presumed 14 days turned into about eight months of absentee ballots, canvassing boards, a mini-trial, Supreme Court hearings, and daily and dueling spinning by lawyers and spokespeople. It wasn’t sports, but there seemed to be a game — a serious game about the future of Minnesota’s U.S. Senate seat — just about every day. I was used to the pace and the post-game trash talk.

Here’s what I took away and it sounds trite, but it’s not: Democracy is a messy, but beautiful, thing. Oh, and another thing: Every vote counts. Not a bad lesson in 2008 — or for 2018.

Weiner’s coverage of the Coleman-Franken recount — the most notable of which you can find here, here and here — would go on to win the Frank Premack Award for public affairs journalism, one of Minnesota’s most prestigious journalism awards.

From day one, MinnPost’s nonprofit newsroom has depended on support from readers. These tax-deductible donations have been instrumental in MinnPost’s growth and success.

As we celebrate our 10th anniversary, we’re asking loyal readers to continue making MinnPost possible with a member contribution. These contributions, in any amount, are vital to our work.

MinnPost 10 at 10: Jay Weiner looks back at the Franken-Coleman recount