The 2017-18 MinnPost Social season continued Monday evening, when more than 100 people gathered at Elsie’s in northeast Minneapolis to discuss the results of 2017 municipal elections and look ahead to the 2018 elections. Featured at the event were MinnPost reporters Peter Callaghan and Briana Bierschbach.

MinnPost editor Andy Putz moderated the discussion, which touched on the impact of ranked-choice voting, the influence of outside organizing groups, and the dynamics of local government moving forward.

Looking ahead to 2018, Bierschbach discussed how gubernatorial and legislative campaigns are starting to take shape, including the potential impact of recent allegations of sexual harrassment and assault at the Minnesota Capitol.

The event was the second of the 2017-18 MinnPost Social series, sponsored by RBC Wealth Management, in which MinnPost journalists share their insights with the public. The events are free for MinnPost members, $10 for nonmembers. 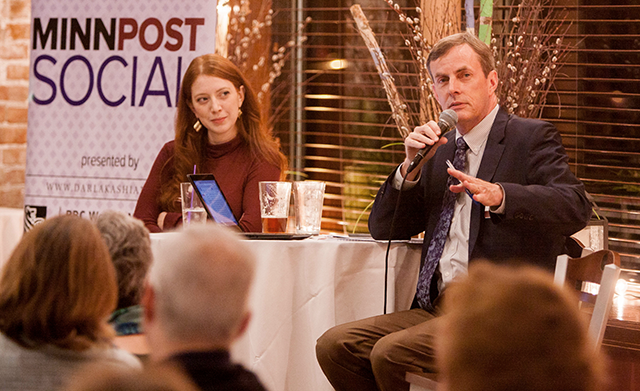