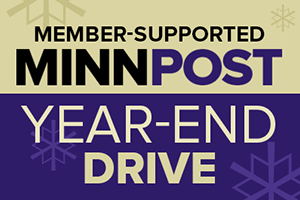 MinnPost’s in-depth coverage of politics, the environment, the arts, and culture goes beyond the headlines and connects readers with the people and stories that make up Minnesota.

That work is only possible thanks to reader support, and as a limited-time offer, those who give during the Year-End Drive can receive up to exclusive ‘Top 5’ lists from MinnPost journalists.

The larger the tax-deductible donation made, the more lists that can be selected. (Lists will be sent to recipients by email in early January.)

Support at any level is vital to MinnPost’s nonprofit newsroom and will help us reach our year-end goal of $75,000 by Dec. 31. (And up to $1,000 of each donation will be matched dollar-for-dollar thanks to News Match!)

A big thanks to those who’ve already given during the Year-End Drive. Those who give are encouraged to let us know why they support MinnPost. Here’s what a few recent donors had to say:

MinnPost is consistently informative beyond the headlines. — Sheila Ehrich, Farmington

Independent media has never been more important than it is now. — Karen Skaja, Minneapolis

There is a big need for an independent journalistic voice in the Twin Cities, one that is not part of a commercial enterprise that backs one political party over another. — Samuel Brungardt, St. Paul

Although I live in California, I like to keep up with all things Minnesota, where I grew up. — Gary Alinder, Vallejo, California