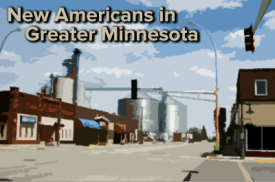 MinnPost is happy to announce the launch of a new area of coverage today: stories about immigrant and refugee populations and their impact on communities throughout Greater Minnesota.

If that focus sounds somewhat familiar, it’s no accident. The new coverage expands upon an effort MinnPost launched two years ago, when we kicked off our New Americans beat, which looks to provide thoughtful, ongoing coverage that reflects the realities of the immigrant experience here.

Since then, most of our New Americans coverage has focused on issues facing groups living in the Twin Cities. Yet we soon came to realize that some of the most important issues facing immigrants and refugees in Minnesota — and some of the best stories — are happening far outside the metro area. This new project aims to remedy that gap by exploring the experience of immigrant communities in cities, towns and rural areas throughout the state, be it Ada or Zumbrota or anywhere in between.

To kick off MinnPost’s expanded coverage, we’re publishing a story today that looks at the increasingly important role doctors trained outside the U.S. are playing in Greater Minnesota. Written by Joey Peters, the story offers a deep dive on how a confluence of events — a doctor shortage and an aging population, among them — has significantly altered the face of medicine in many parts of the state.

In keeping with MinnPost’s editorial independence policy, these funders will play no role in determining the content of our coverage.