Show-only tickets go on sale in March! (MinnPost Gold and Platinum members receive a 25% discount. Donate at $10/month or more to get the discount.)

Patrons get multiple tickets to the show and the exclusive pre-show reception. (See our current Patron list.)

MinnRoast is our annual song-and-skit fundraising extravaganza featuring your favorite Minnesota politicians, journalists, singers and actors singing, dancing and poking fun at each other and the state we all love. In 2020, MinnRoast is set for Friday, April 17.

Notable names scheduled to appear in-person or on video this year (so far!) include:

And while it’s a fun evening out, MinnRoast is MinnPost’s largest fundraising event of the year, providing crucial support for the reporters in our nonprofit newsroom and our in-depth coverage of the stories that matter to Minnesota.

The evening begins at 6 p.m. with a pre-show reception at Rock Bottom Brewery for MinnRoast Patrons, Sponsors, and their guests. The reception features upscale hearty hors d’oeuvres with a twist. The cash bar offers a wide selection of handcrafted beers, wine and spirits. Reserved booth or table seating is available for sponsor groups on request.

For those with show-only tickets, the Historic State Theatre lobby bars and doors for theatre seating open at 7 p.m. The show will start at 8 p.m. and run for about 90 minutes with an intermission.

The location for MinnRoast is the Historic State Theatre. The pre-show reception and after-show happy hour will take place next door, at the Rock Bottom Brewery (map). 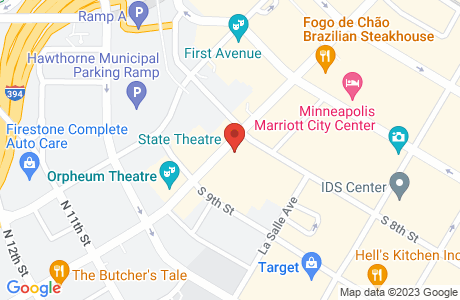 If you have questions about being a Patron, please contact Tanner Curl at tcurl@minnpost.com or 612-455-6954.

▶ Individual show-only tickets will go on sale in early March!

MinnPost Gold and Platinum members – who donate $10 a month or more – receive pre-sale access and a 25% discount on show-only tickets. Become a member today.

Become a MinnRoast Patron today to ensure you’re recognized here (and at the event). If your organization is interested in sponsoring MinnRoast, please contact Suzanne Childs at schilds@minnpost.com to learn more.

Thank you to all of the individuals and organizations who support MinnPost’s nonprofit newsroom through MinnRoast!