Just three weeks into my new job as editor of MinnPost, D.C. correspondent Ana Radelat called me with some news: U.S. Rep. Dean Phillips had told local radio host Chad Hartman that he hoped a Democrat other than President Joe Biden would step up and run for president in 2024.

“No one else (in Congress) has gone that far,” Ana told me, noting MinnPost reporter Walker Orenstein had sent her a tweet about it. She was right. While a few members of Congress had dodged questions or raised doubts about a Biden re-election, Phillips said, “I think it’s time for a generational change.”

Less than a week later, Walker ran after U.S. Rep. Angie Craig in the 90-degree heat at Farmfest to ask her whether she’d support a Biden-led ticket in 2024. She told him she was “in lockstep and alignment” with Phillips.

Both stories were cited multiple times by national outlets and TV programs, and for Minnesota readers they helped illustrate an important divide among Minnesota Democrats in a tough midterm election year in which it’s in some candidates’ best interest to distance themselves from the president.

It’s exciting to be part of a newsroom that can be nimble and jump on stories that matter while also priding itself in longer-term, in-depth enterprise reporting that no one else is doing.

The MinnPost newsroom looks forward to bringing you more of this important journalism, but we can’t do it without your support. Please join Team MinnPost by becoming a member and making a financial contribution. And if you’re already a member, please consider either increasing your contribution (you can do that by emailing our membership team) or inviting others to join. We appreciate you!

How to get your ✨ limited edition MinnPost t-shirt ✨ 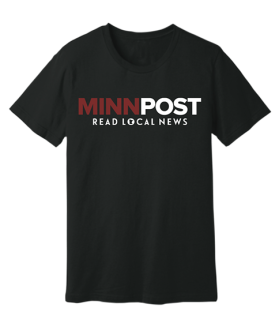 Donate at the $10/month or $120/year level or above, and you can get a limited edition MinnPost t-shirt! You’ll get to support independent local journalism and show off your MinnPost pride. These shirts are only available through Sept. 22, so don’t miss out!

Reporting on the stories that matter