It’s amazing the things artists, galleries, and museums will place in front of us expecting us not to touch. You don’t touch the art — and mostly you don’t need to be reminded.

I’ll just come out and say it: Sometimes I touch. Never the paintings, but sometimes the sculptures. It’s a quick touch — so quick that occasionally I forget to check if anybody is looking.

Still, I would never have touched Minneapolis artist Abinadi Meza‘s giant glass panels on display at the Weinstein Gallery, except that gallery director Leslie Hammons told me to do it. I owe Hammons a word of thanks. It was only when I put my hand on Meza’s work that I understood it. And that’s kind of strange, because Meza works mostly with sound.

The most intriguing work at the 32-year-old Meza’s solo show is the sound I touched. There are six thin sheets of glass, some as tall as 7 feet, leaning against the walls of one room. Attached to each sheet of glass is a small electromagnetic sound driver (the part of a speaker that generates sound waves). The sound driver is connected to an iPod that plays Meza’s field recordings of waterfalls he visited on long walks along Minnesota’s border with Canada. 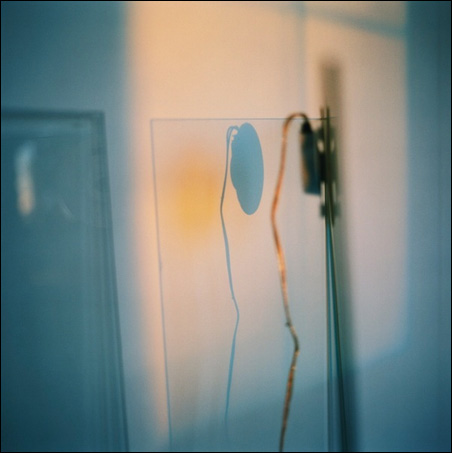 Courtesy of the Weinstein Gallery
Each of Meza’s “Delay in Glass” pieces consists of tempered glass, an electromagnetic sound driver, and a customized iPod.

Meza’s turned the glass into something like a speaker. Touch it and you feel the sound. It’s remarkable really: Each of the six glass sheets (called “Delay in Glass I-VI”) is vibrating with the sound of a different Minnesota waterfall. In the room, it’s something of a low-intensity cacophony. Touch the edge of the glass and it’s like the waterfall is somewhere just beyond the room, maybe underneath it — it’s a near-perfect reproduction of what you feel in your feet standing at the edge of one.

“It wasn’t my goal to recreate the waterfalls,” Meza says. “It’s closer to the opposite: I’m presenting the least available information from this force — it’s almost like residual memory.”

It was with this “residual memory” concept in mind and an electromagnetic sound driver in hand that Meza walked into Brinn Northwestern Glass Co. in northeast Minneapolis. The artist was preparing for the Weinstein show and wanted to test different sizes of glass. But what Meza does is called “sound art” and they don’t do that at Brinn — they do store front windows, shower glass, and mirrors.

“I’ve worked with all kinds of different people to help me obtain materials to realize different pieces. They’ve never heard requests like mine, of course, and usually the first response is “Excuse me?” — but it’s always a good experience.” There’s really no protocol, he says, for saying no to a proposition like touching a sound driver to several sizes of factory glass.

The trap, he says, is for a trained artist like himself to fall into thinking only trained artists could possibly understand what another trained artist is trying to create. That’s not Meza’s style — at Brinn they may have been befuddled, but they didn’t stay that way.

“It’s like you’re trapping a waterfall in a room” said one Brinn employee. “That’s exactly what I’m trying to do,” came the response. 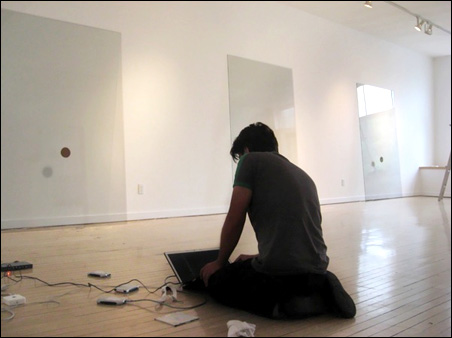 “The border between Minnesota and Canada captivates me,” Meza says. “It’s essentially just a line of water. We have that on the southern border as well.” Here’s where Meza’s work becomes something more than naturalist. It was across that southern water border that Meza’s father entered the United States from Mexico three decades ago. Meza is not surprisingly drawn to these “symbolic lines.”

Over the course of a year Meza visited the northern border area, where he hiked along river trails and hauled recording gear and a couple of cameras with him. He took to the waterfalls — they were everywhere. “We give them names like ‘Niagara’ as if the thing was planted there,” he says. “But it’s really a river passing through and the falls are just a very brief moment in the life cycle of the water.”

Meza is something of a chronicler of very brief moments. Where he recorded the waterfalls he also captured snapshots and 16mm film of the clouds and airplanes above — as impermanent as the water below. 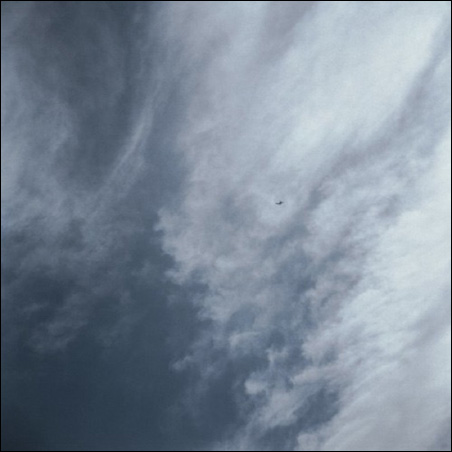 He called the snapshots “Sound Channels” and gave them site-specific names like “Devil Track,” “Brule,” and “Cascade.”  Walking between one room and the next at Weinstein, it’s as if Meza took the northern Minnesota river-trail experience and shattered it into tiny pieces. The experience isn’t reassembled (how could it be?); rather it’s scattered in meticulously sculpted fragments.

The meticulous sculpting of sound is what Meza does best. “A ‘sound artist’ works with sound as a material,” says the one-time painting major.

But these days, just as the digital camera has made just about everybody a photographer, a market flooded with intuitive and cheap audio editing programs like Apple’s Garage Band have given the world countless self-described “sound artists.” Meza celebrates the ubiquity while separating himself from it. “I try to go beyond the having put the thing together. Sometimes the process is so labored that once it works — once you have the sounds you want — it’s like: success! But then you have to start asking the critical questions and that’s the hard thing.”

The Weinstein show ends Sept. 22nd, but Meza’s not finished with his water recordings. “I haven’t exhausted the material,” he says, “not by any stretch.”

Jeff Severns Guntzel writes about the arts and other topics for MinnPost.

Touch the sound, I won’t tell