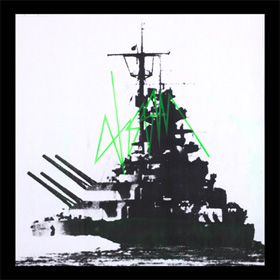 Courtesy Soo Visual Arts Center
“The Scourge of the North”

Here’s something that never occurred to me until I looked at Minneapolis artist John Vogt‘s work: Battleships look kind of like mountains.

It’s a strange thing, but Vogt seems to be intimate with battleships and mountains. What’s stranger still is the way that intimacy is contagious through his art. His battleships — whether on paper or sculpted of paper — are lonely and vulnerable things. His mountains, too. Maybe that’s because they are more about loneliness and vulnerability than they are about steel and rock.

How do you get lonely from a battleship? There are 1,000 dead Nazi sailors who could probably speak to that. They died aboard the Tirpitz, a German battleship that was so fierce and valuable an asset that Hitler hid it in the fjords of Norway for most of its life at sea — it was too great a ship to lose. But it was lost just the same when the British Royal Air Force, tired of living in fear of the doom ship, just sank the damn thing in 1944. It had fired its guns in battle only once.

The Norwegians, who to this very day use scrap from the ship in road construction, called the Tirpitz “The Lonely Queen of the North.” Vogt is obsessed with the Tirpitz as an object, a symbol and a story. On one wall it’s exploding in a small frame. Nearby it is nested in the fjords, orange paint smeared on its side. On the floor, it is sinking.

Time is collapsed
And how do you get vulnerable from a mountain? Time, friend. And lots of it. Vogt collapses time in his two pieces “The Beginning of the End” and “The End of All Things.” The first is a jagged mountain peak and the second is that same peak, eroded. These are the first pieces you see, and every mountain you see after that can’t help but seem vulnerable.

He calls his Soo Visual Arts Center show “Paper Tiger” — and that’s China’s Mao Zedong talking in 1965: “In appearance it is very powerful but in reality it is nothing to be afraid of; it is a paper tiger. Outwardly a tiger, it is made of paper, unable to withstand the wind and the rain. I believe the United States is nothing but a paper tiger.” 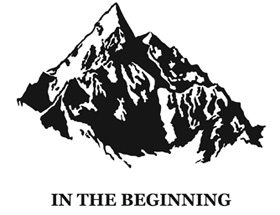 Courtesy Soo Visual Arts Center
“The Beginning of the End”

Vogt even manages to make the United States seem vulnerable and lonely. Actually, he makes the United States seem dead — long dead. The Tower of Babel-inspired piece he calls “Nimrod’s Folly” is a striking matt black and square column of 6 feet. It rests on a reflective black base. The phrase “ONE NATION UNDER GOD” appears at the bottom of the column — letters lit from inside the sculpture. It feels for all the world like a tombstone.

None of Vogt’s work feels like a product of any particular political moment — though all of it feels political.

“I would prefer to either present contemporary issues in a more abstract way,” he says in gallery literature, “or focus on events or people that history has had a chance to digest or reflect on.”