Twins owner Calvin Griffith was a few drinks in at a 1978 Lions Club function in Waseca when he started talking about why he chose Minnesota as a home for his ballclub. Minneapolis Tribune reporter Nick Coleman was in the room, and here’s what he scribbled in his notebook:

“It was when I found out you only had 15,000 black people here. Black people don’t go to ball games, but they’ll fill up a rassling ring and put up such a chant it’ll scare you to death. It’s unbelievable. We came here because you’ve got good, hardworking white people here.”

Griffith was on a roll that night, also calling Twins star Rod Carew “a damn fool” for signing a three-year contract with the team at $170,000. “He’s worth a lot more than that, but that’s what his agent asked for, so that’s what he gets.”

In October 1978, Jet magazine printed Carew’s response: “I’m not going to be another nigger on [Griffith’s] plantation. The days of Kunta Kinte are over.”

Griffith claimed Coleman got it all wrong and Carew said his words were twisted. All the same, by 1979 Carew was playing for the Angels.

Last week the Twins unveiled a statue of Griffith, placed in spitting distance of the Carew statue near Gate 29 at Target Field.

The Lions Club remarks haunted Griffith for decades. Less known but just as public in its time was the Minnesota State Commission on Discrimination complaint against the Twins in 1962. The Twins, having been in Minnesota for scarcely a year, were the only team in Major League Baseball still segregating black players during spring training in Florida.

The complaint launched a bitter and very public debate, with black players like catcher Earl Battey (who brought the issue to the state’s attention) and outfielder Len Green stuck in the middle. 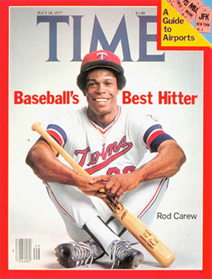 “They tell us one thing,” Griffith said of the team’s most vocal black players, “then they get up in front of the NAACP and say something entirely different.”

Calvin Walton, the head of the Human Rights Commission, came at the players from the other side. “I don’t have much sympathy with these ballplayers if they choose to go along with this damned system,” he told the Minneapolis Tribune. “Any negro male who occupies the position these men do and allows himself to be discriminated against is knifing the civil rights movement in the back.”

Griffith finally caved just before a scheduled public hearing on the issue in 1964, after two years of heavy pressure by the state, intense media scrutiny, and threats from civil rights organizations of picket lines outside Metropolitan Stadium.

In an editorial titled “At Last Our Twins Are Integrated,” the Minneapolis Tribune wrote: “The racial distinctions which were drawn in spring training were the snobbish relic of a baseball era now vanished. The Twins should be a better club because those distinctions have been erased. Come on, team, catch those Yankees!”

Media clippings and records of the state’s actions against Griffith and the Twins are stored deep in the state archives at the Minnesota Historical Society. We dug a few of them up for you to have a look.

Article continues after advertisement
Calvin Griffith vs. The State of Minnesota

Racial justice for the Minnesota Twins: The forgotten battle