The Minneapolis murder rate was on the decline in recent years — down from a 10-year peak of 60 murders in 2006 to just 19 in 2009. This year there has been a disconcerting jump. The body count passed that of 2009 by May and stood at 37 by the end of October.

Worst hit so far has been the 4th Precinct, which covers the city’s north side where 61 percent of this year’s victims were murdered. We’re a long way from the mid-1990s — in those years we were at close to 100 murders per year and even The New York Times used the term “Murderapolis” (in a June 30, 1996, piece, “Nice City’s Nasty Distinction: Murders Soar in Minneapolis”).

I’ll be tracking murders here at The Intelligencer and it begins with the map below, built from a spreadsheet you can download or view in your browser.

How you can help
Look over the data yourself. What data would you like to see? What patterns do you notice? What questions should we be asking? I created the map and graph below using Google Fusion Tables. You can create your own visualizations. If you do, share them with us in the comments. And of course, corrections are always welcome.

2010 Minneapolis murders mapped
Click on the red dots for details 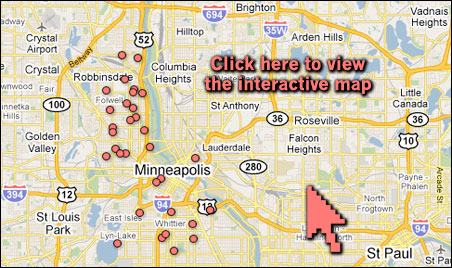 2010 Minneapolis murders by cause

Minneapolis murders on the rise: Tracking the data