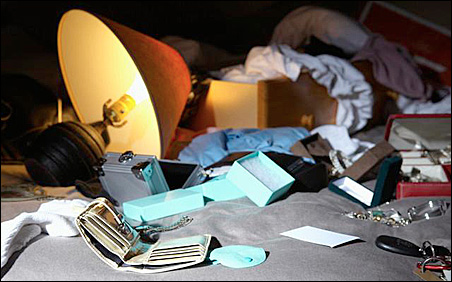 I live in Minneapolis’ Standish neighborhood. I’m in the third precinct, where burglaries in 2010 were up nearly 33 percent in 2010 (this after a decline in 2009).

Our neighborhood E-Democracy.org listserv is buzzing with posts by furious and fearful homeowners. At a neighborhood meeting with precinct crime prevention specialists this week, residents told their stories of break-ins and attempted break-ins.

Conventional and unconventional security tips were shared. There was the man who installed a door that swings out, not in, making it very difficult for strong-footed burglar-types to kick their way in.  There was the woman who left her blinds up just enough to show dirty dishes and an open newspaper on a table — signs of life (and occupancy) for window peepers with burglaring ambitions.

Others told of failed strategies: dog toys in the backyard and alarm systems so complicated to use that the victim stopped using them altogether.

Then there was the big picture discussion: How do we protect our neighborhoods without becoming a community of narrowed eyes peeking through curtains and reporting every unfamiliar face to the police?

Maybe your community hasn’t seen an increase in burglaries like mine has. Citywide Minneapolis was up by just under 2 percent. Still, there were more than 4,500 burglaries in the city in 2010.

Do you have a story or a strategy to share? If you experienced a recent break-in, what surprised you most? What did you lose? How was your experience with the police? Was there a suspect? An arrest? A charge?

It doesn’t matter what part of the state you’re in, but let me know where you live when you chime in. Don’t be a stranger.