Minnesota’s population became more diverse between 2000 and 2010. There are nearly 107,000 more Hispanic residents in Minnesota today than there were ten years ago — a jump of 74 percent.

Residents who checked the box next to “black, African American, or Negro” on their 2010 Census form rose almost as much: close to 103,000 people.

The minority population’s growth exceeded State Demographer Tom Gillaspy’s expectations, but only by a few percentage points. All the same, he’s quick to point out that Minnesota is not a terribly diverse state. “We’re towards the bottom for the country,” he says. “Down there with South Dakota and Wisconsin and a little bit ahead of North Dakota and Iowa.” 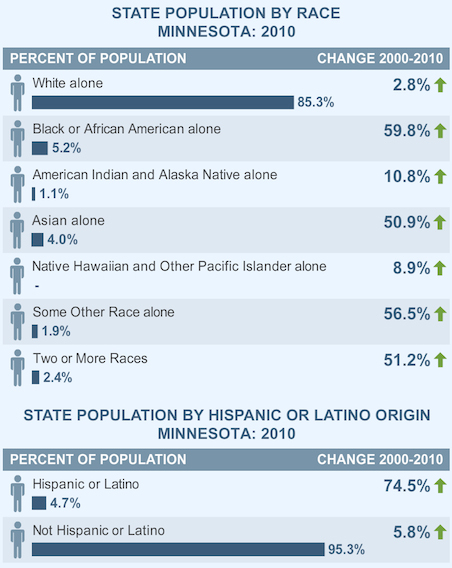 Gillaspy also points out that even in our biggest growth area — the Hispanic population — we’re still way behind the country as a whole. Numbers from the Department of Homeland Security bear this out. In 2009 (the most recent data available) 164,000 Mexicans immigrated to the United States while fewer than 900 landed in Minnesota.

Hennepin County was at the heart of black population growth — a 36,000 change between 2000 and 2010. Ramsey County saw the second largest growth — but it’s a distant second with fewer than half the number recorded for Hennepin.

A little farther down the list — but still with black population growth of at least 1,000 people — are several counties outside the metro region, which reflects a broader African immigrant community in Minnesota.

It’s an inevitable shift, explains Gregg Aamot, a reporter who has been covering immigrant communities in Minnesota since the early ’90s and has reported for MinnPost. He points to the pockets of Somali communities around the state. They might settle in a town in small numbers at first and then “there is a reunification aspect, where people are attracted from the Twin Cities because there is a family connection or because they have clan ties in that part of the state,” Aamot says.

Why small towns? There are the meat packing plants and agricultural jobs — with significant opportunities created throughout the decade following a wave of massive immigration raids that swept up mostly Hispanic workers and carried them away cuffed and headed for deportation court.

Jobs aren’t the only draw, however. To some, rural Minnesota may seem a strange fit for Somali immigrants, but why should it? Here’s Aamot again: “A lot of Somalis have told me, ‘We’re from small towns in Somalia and we like the rural life—we like smaller communities.’”

Hearing about the new Census numbers for the first time, he wonders about what it will take to sustain those rural and small city communities. “I’m interested to know a little more about what jobs are out there and whether they are the kinds of jobs that can sustain the growth for the long haul.”

Minorities in Minnesota: What the Census tells us