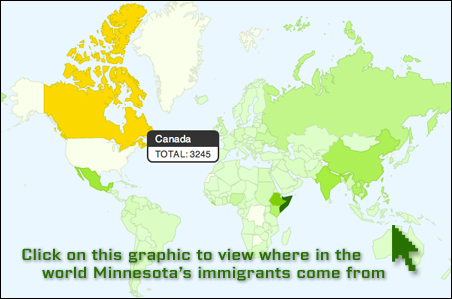 We know from 2010 Census data that Minnesota is more ethnically diverse today than it was in 2000. And we know from Federal immigration data that our increasing ethnic diversity has been driven by immigration.

But where exactly are all of these immigrants coming to us from? The top five countries of origin probably won’t surprise you:

Who are the others? We rarely hear about the 450 Iraqis who have found their way here at an average pace of roughly 45 people per year or the nearly 6,000 Chinese who have settled in Minnesota since 2000.

Have a look at the interactive world map we’ve posted. Just roll your mouse over any country to see how many people made the journey from there to here between 2000 and 2009.

Want to dig a little deeper? Here’s the complete data. Click on the “visualize” button and you can create your own maps or charts. Let me know what you find — a telling pattern or something that puzzles you — in the comments below.

Interactive Map: Where are Minnesota’s immigrants coming from?