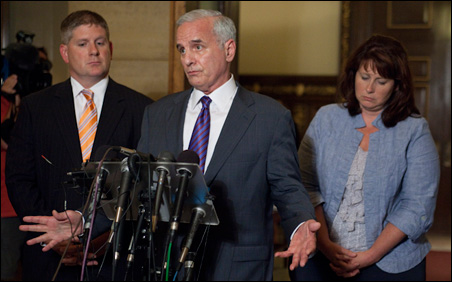 After several weeks of dread leading up to two weeks of shutdown, there is an agreement that is expected to put this profound failure of governance behind us.

If you’re a Mark Dayton supporter, what’s on your mind? What would you have had him do differently? If you back the GOP, do you feeling vindication or disappointment? For both sides: would you have tolerated a longer shutdown if it meant a different agreement?

Nonprofits, social justice organizations and community activists, I have a question for you too: Could more have been done at the grassroots level to prevent the shutdown? If so, what?

I want to know what’s on your mind. If you are a state employee and you are eager to speak your mind but protect your identity, you probably know the drill by now. I’ve created a form for this purpose. I’ll identify you by first name only if you provide me with the details I need to confirm your identity. You can share your thoughts confidentially by clicking here.

As always, I’ll be reading what you write and pulling some of it up from the comments and into this post.

My humble request: I’m always hoping for diversity of opinion. Share yours and speak as strongly as you need to. Argue where you feel you must. But please, no personal attacks. Let’s get as many voices as we can into this thing.

“I’m happy that I likely will be going back to work soon. However, this deal didn’t really bring anything new to the table. It makes me wonder why we allowed the shutdown to happen at all if they weren’t willing to hold out for something new. I’ve lost 15 days of pay so far. For what?”  — Chris, state employee

“I am incredibly frustrated with both parties. All they are doing is borrowing and delaying payments. Speaking as an independent, I do think Dayton came out better than the Republicans. He was in the news constantly offering compromises and the republicans weren’t.”  — TJ Simplot

“Speaking as communications director of the American Lung Association in Minnesota, we are very disappointed in the decision to issue tobacco settlement bonds. It’s an one-time fix that doesen’t really fix anything. It will hamper the state’s ability to reduce tobacco use for years to come, and it will cost taxpayers in added interest fees. Bad idea. Raising the tax on tobacco could have closed a big chunk of the budget gap and would have been a long term, sustainable path out of the budget mess.”  — Robert Moffitt

“Sooner or later we have to come to grips with the fact that we have been shortchanging society by putting government on the credit card, mostly to the benefit of our high income residents. We need to reform the tax code and be honest about what government costs us and pay the bill. The poor, the disabled, the elderly and our school children will pay the price if we don’t. Ultimately, we will all suffer as a consequence.”  — Patrick Guernsey

“I’d like to see some deep reporting on the mythical ‘job providers’ who who can’t be taxed. I want profiles with names and faces of folks whose profits (net after expenses and deductions) are over a million dollars and who are willing to say that they will shut down their business rather than pay a fair share in taxes.”  — Steve Waage

“It is absolutely terrible, but there is really no other choice. Just as the DFL had to do with Pawlenty, it has to do with an obstinate GOP legislature — temporary fixes. Remember when the GOP and the DFL could work together? Now the state parties are mirror-images of their national counterparts.”  — Chrish Henjum

“I am a Dayton supporter and I support the deal. I work for a non-profit social service agency. Through the two court rulings, most but not all of our services were deemed critical core services. But the shutdown has still been very stressful for our clients and the employees who serve them.

“I know all this deal does is kick the real problems down the road. But it’s clear to me, and apparently it was to Dayton, that this was the best deal we could get. The offer the Republicans put out there on June 30th, with the ‘policy’ conditions, made me angry. It seemed to give the lie to their campaign slogans about jobs and reducing spending, and instead showed me that apparently they are willing to spend more if they can get their conservative social agenda through.

“I think Dayton called their bluff. Because the shutdown’s wide impact had begun to evidence itself (even beer!), the Republicans found they had to say yes. The Republicans will work hard to spin it another way to the media, but I think Dayton was brilliant, actually.”  — Margaret Macneale

“I’m a Dayton backer. Yes, I’m disappointed. Disgusted, in fact, by stealing money from education and future revenues. However, I’m not one of those suffering greatly in the shutdown. I know several state workers that have said they support Dayton and would be willing to go without work longer. However, how much longer can they truly afford to? If he stands his ground on removing the social issues, he’ll have redeemed himself a tiny bit in my mind.”  — Rachel Kahler

“My take is that regardless of the party this is a ‘Live to fight another day’ move. And for Dayton there will be one more budget cycle, possibly with a DFL majority.” — David DeCoux

“Mark Dayton has repeatedly said that this plan is bad for the state and that he disagrees with it wholeheartedly. I completely agree with him there. However, I don’t feel that we’ve exhausted all options.”  — Andrew Richner

“It’s a lousy agreement that puts off real solutions — again. As bad as it is, it is better than continuing the shutdown. The biggest lasting effect on me is a firm decision to get back into politics in a big way. I am angry, and can’t stand on the sidelines anymore.

“Growing up in a small business family with a parent who was very heavily involved in Republican politics, I grew weary of that party as they strayed further from their true fiscal conservative roots and increasingly insisted on stepping into religion and personal decisions. How different would the shutdown have been if we had a stronger presence from the only true moderate party — the Independence Party?”  — Tim, state employee

“I have mixed feelings about this potential agreement. On the one hand I REALLY need to get back to work. On the other hand I’m extremely disappointed at the ‘framework’ as it fixes none of the mess that got us here to begin with and only compounds those problems well into our future.

“As painful as it has been I think I would have preferred to wait it out until a better plan could have been developed, but then again the GOP may never have come around to that anyway. The Governor gets high marks for at least trying to compromise where others have not budged a millimeter.”  — Kristin, state employee

“I am also a horseman. Closing the track over an accounting technicality even though the fees to keep it running have been paid through the end of July was ridiculous. Even more ridiculous was a single judge’s decision to keep it closed without a clear reason and then to hear an appeal to her own decision which she naturally upheld. This move has lead us to another closed weekend and another hit on the livelihood of the track people. These people represent a large industry in the state. Because they only have one venue in the state, they are dependent on its operation. The closure took away four weeks of races that are hard to make up this late in the season.”  — Claire Lundgren