Michele Bachmann needs no introduction. Or does she? Type Bachmann’s name into Youtube and you’ll have a day’s worth of watching queued up before you. Mostly they are the notorious moments: gaffes, controversial proclamations and sparring with television news anchors.

These notorious moments are part of who Michele Bachmann is, and they are just about all she is to many Americans. Put all of that aside (a tall order, I know), and there is one hell of a life story there. Many people simply cannot relate to, or are deeply offended by, Bachmann’s political activism and the evangelical Christian faith that informs it, but beginning just days after her graduation from Anoka High School, Bachmann has been exploding into one passion pursuit after another with a singular vision. Just about anybody can relate to a search for meaning.

It seems like the time is right for attempts at understanding Bachmann as a deeply influential politician rather than a cartoon character. We don’t know what will happen to Bachmann’s presidential campaign in coming days, weeks, and months; but we can be assured that, whatever happens, she will continue to inspire, confound, and churn out the stuff of headlines and viral videos.

Our Bachmann timeline is comprehensive, but it is not completist. It is meant to show the celebrity politician in three-dimensions. Want to learn something you didn’t know about Bachmann? Uncheck the box next to “notorious moments” on the timeline and you’ll be sure to.

This timeline is a gateway. We’ve linked to some of the best and most robust examinations of Bachmann’s personal, political, and religious life.

Nerd note: We used ProPublica’s fantastic TimelineSetter, a fun and elegant open source command-line utility that “bakes out” a very cool, very easy to use news app. MinnPost’s Kevin Schaul and Kaeti Hinck were instrumental in making this thing work and look good. 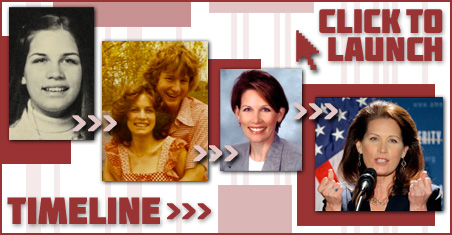