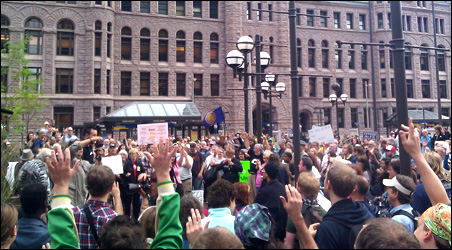 The Occupy Wall Street protests are spreading across the country, and they have arrived in Minnesota. I’ve collected tweets and images from the first hours of the protest and embedded them below. There is also live, streaming video of the OccupyMN protest. Will you be joining the protests? Are you already there? I’d love to hear from you in the comments. What is it like this morning? What are your hopes for the protest as it moves forward? Is there anything you’d like to see done differently here, having followed or participated in the New York City protests?

Also, here is the schedule for this first day:

I spoke with Minneapolis Mayor RT Rybak this morning as the protest was beginning. Here is what he had to say:

A value throughout all of my work has been to spend more time and money where there is more need. It is something I learned as a kid at my parents drugstore in a neighborhood where many kids were not as lucky as me. The rapid concentration of wealth at the very top makes that work more important today. I welcomed the organizations to my office and I brought in the Chief of Police. I plan to walk across the street and say hello — not necessarily sanctioning anything that has been said, but making it clear that they have a right to speak their mind in our city.

Here is Rybak’s official statement on the protests.