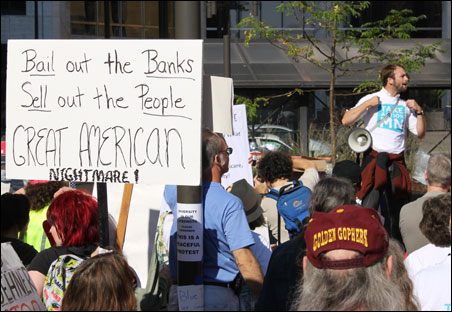 The OccupyMN protests are one week old today, and headed into their second weekend. The cold and wet weather crept in this week — so far the organizers’ greatest adversary in their effort to keep the Government Center Plaza populated with protesters, who have been sleeping in the elements, having been denied permission to pitch tents.

Now they are not asking for permission, they are demanding it. Here’s a statement released today:

As OccupyMN reaches its one-week anniversary of the occupation of the People’s Plaza, we continue to stand in solidarity and remain committed to fighting for the 99%. We have been sleeping overnight without tents in the rain and cold. As the weather gets colder, for the health and safety of all of the occupiers exercising their first amendment rights, we decided at last night’s general assembly that we will hold a rally and set up tents this Saturday at 4pm. Just like food and water, we believe that shelter is a basic human right.

We have met repeatedly with the sheriff and chief of police but they have yet to resolve the issue. We have mobilized supporters to call the commissioner and county administrator Richard Johnson to petition we be allowed to set up tents. We will physically deliver petitions this afternoon to the county, and we are hopeful that we will be granted permission to set up tents as other occupations around the country have been allowed to.

Allowing protestors to stay the night in tents is not a new or unreasonable request. Earlier this year here in Minneapolis, a group protesting for fair wages was allowed to stay overnight in tents for 12 days during a hunger strike at Cub Foods.

We hope the police will not arrest peaceful demonstrators, but we have been training participants in non-violent civil disobedience to ensure our safety in the case arrests are made. Two more trainings will be held at the People’s Plaza today at 1:00pm and Saturday at 2:00pm. A safe zone will be designated for those who do not wish to risk arrest. We invite all Minnesotans to join us and stand in solidarity with OccupyMN and all other occupations around the world.

Other, less confrontational plans are underway also. There is a posted schedule for teach-ins, ranging from “demystifying wall street” to “mindfulness for activists.”

Occupy Wall Street vs. Tea Party
There has better chatter from the start about similarities between the Tea Party and participants in the Occupy Wall Street protests. Mostly, those comparisons have focused on tact and tactics. Blogger James Sinclair has gone so far as to create a Venn diagram to show what he sees as the intersecting interests of the two movements. 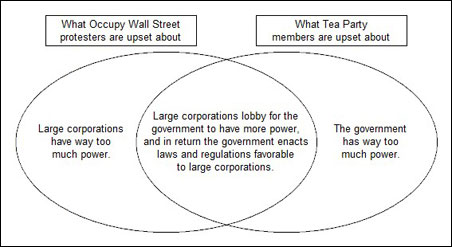 If this new Occupy Wall Street movement is to survive, here’s what needs to be done.

Loudly denounce violence and disavow the violent rabblerousers of the movement. They do not help the cause.

Be image conscious. Present your best face and call out those who act like fools within the movement. People are more likely to pay attention to you in your Sunday dress and bringing homemade food, than when you are drinking a bottle of Snapple and chomping on Big Macs while you are looking like a slacker rich hipster/unwashed hippie stereotype.

…If you hear people who you know are part of the machine saying stuff like, “Progressives need to be more like the tea party,” don’t accept it on face value. Always follow the money, study past statements and groups they claim to be part of. If such people are suddenly telling you to emulate organizations that they once consistently denounced as evil or racist, without any rhyme or reason, they are lying to you. 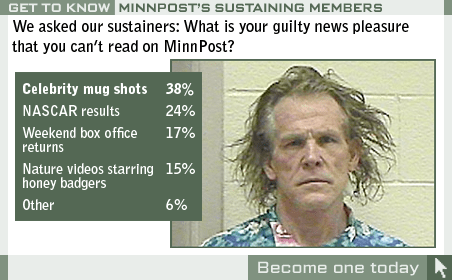 An alliance? Really?
Conor Friedersdorf of The Atlantic has gone so far as to suggest that the Tea Party and Occupy Wall Street should cooperate:

Don’t misunderstand. Mutual wariness between the Tea Party and Occupy Wall Street makes sense. These are people whose visions for the future of the country are very different — on certain issues of import, and in races between certain candidates, they ought to be battling one another.

…Tea partiers and Occupy Wall Street protestors could vote for different candidates in 2012, fight vociferously about the ideal size of the federal government, and meanwhile cooperate to prevent big business and co-opted bureaucrats from capturing money that could be better spent (on tax cuts or deficit reduction or infrastructure or social welfare benefits, depending on the outcome of another fight). If the United States and the USSR struck mutually beneficial treaty agreements during the 1980s, if the ACLU and the NRA have usefully allied on civil liberties issues, despite their strikingly different donor bases, there is no reason save stubbornness and political immaturity that the Tea Party and Occupy Wall Street can’t find areas on which to cooperate. Perhaps the Cato Institute and the Center for American Progress can co-host the summit, and Rand Paul and Dennis Kucinich can co-sponsor the resulting reform legislation.

Is all of this poppycock, or have the comparisons occurred to you also? Looking just at OccupyMN, it would seem way too early for this conversation. But looking at OccupyMN as an extension of the much more robust and discussed Occupy Wall Street protests, the conversation feels inevitable. Your thoughts?