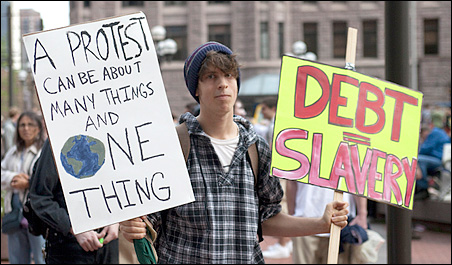 MinnPost photo by Terry Gydesen
This occupation, above all, is about the ultimate expressions of free speech.

The Occupy Wall Street protests have spread to more than two dozen cities. Last Friday, the protest came to Minneapolis. OccupyMN is now in its seventh day. For those of you have have not visited or taken part in the protests, I can say one thing with absolute certainty: It is not like anything you think it is.

How can I know? Because it is not like anything we’ve seen from the grassroots in recent decades. The Iraq War inspired wave after wave of national and international protest, but these kinds of “occupations” are usually undertaken by small groups of inspired people and they do not spread.

It is not just the movement that has spread, but the template for a people’s occupation.

(I was live tweeting from OccupyMN Tuesday, and I’ve included links to my tweets throughout this post.) 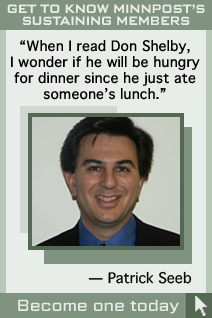 Twice daily there is a General Assembly, where conflicts are resolved, demands debated, and talking points honed. It is a closely managed process. Anybody who wants to speak gives their name to a moderator. When somebody is speaking, there is interaction from the rest of the people gathered, but it is mostly silent. There are hand signals and everybody knows them. There is a signal for “get to the point” and one to show your opposition to a point. There are signals of approval and a desire for direct response to a comment.

The discussion is so orderly and focused on process that it took me 15 minutes of observation on Tuesday to realize they were discussing something rather explosive. Supporters of the controversial political activist Lyndon LaRouche had propped up a giant poster of President Obama with a Hitler mustache. “So we’re the Tea Party now?” one passerby quipped.

A protest with a sponsor or a more traditional organizing committee would likely have just told the sign’s owners that they were not welcome and send them packing. This occupation, above all, is about the ultimate expressions of free speech, and that was the matter under discussion. Some wanted the sign gone; some wanted it less visible, maybe on the ground; and some insisted it should stay where it is because free speech is free speech.

One General Assembly participant explained that the movement had been striving from its start in New York City to keep the faces of political figures out of the protests, that these protests were not about specific politicians, but a culture of greed.

There was no clear resolution. Somebody came to invite any interested protesters to attend the Hennepin County Board meeting and most attendees popped up and headed for the doors of the Government Center.

About two dozen protestors lined up at the metal detectors made their way to the 24th floor, where they were asked by an OccupyMN organizer to be respectful and just listen. And that is exactly what they did. As the county board discussed bridge reconditioning, lead hazards and bituminous overlays, rows of mostly young protesters in ripped jeans and ball caps listened, laughing with one board member who was laughing at a process misstep and focusing intently as the board moved from one agenda item to the next. 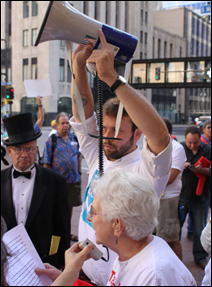 At a march to Wells Fargo that day, the movement showed its capability to produce bodies — even on a Tuesday morning — and its diversity. The crowd of hundreds who marched to Wells Fargo were diverse in race and age.

Filling up the lobby of Wells Fargo, another hand signal came into play. Fists in the air don’t really mean what they used to. When the fists punch the air at OccupyMN, it means be quiet. It was a remarkable thing to witness. A cacophony of chants echoing inside a cavernous lobby went silent in a blink so organizers could call upstairs to request a meeting with the Wells Fargo CEO. There was no meeting, so the fists went down, and the chanting started up again: “We’ll be back! We’ll be back! We’ll be back!”

No matter what you think about the tactics of the protesters, it would be foolish not to participate in the conversation they have started. What do the protests mean to you? Spare me the quips about jobless hippies — it doesn’t get us anywhere and it demonstrates ignorance about what is actually happening downtown and across the country.

Let’s talk about the issues: What have you heard from the protesters that resonates with you? What have you experienced at the protests that would help people to understand the movement better? What does the term “People’s Agenda” mean to you?

Or to borrow a question from the OccupyMN discussion box downtown, “What is your story?”

Speak up in the comments section below and I’ll pull what you are saying up into this post.

UPDATE: I am not pulling comments into the post. What ended up happening was a pretty long conversation with lots of specific replies. Best just to read through it where it is! Thanks everybody for your participation.