Go straight to the map: Minnesota exports to the European Union in 2011

A European recession — and maybe worse — is a real possibility. There has been much talk about the United States’ dependence on a stable Europe. All told, exports to to the European Union hit $240 billion last year.

Minnesota exports to the EU totaled close to $4 billion, or close to 22 percent of the state’s total exports. The percentage for the first two quarters of 2011 has hovered right around 20 percent, according to the Department of Employment and Economic Development’s quarterly reports on export activity.

Of Minnesota’s top 25 manufacturing export markets in 2010, nine of them were members of the European Union. What sorts of exports are we talking about? Here’s a sample: $72 million in plastics to Germany, $170 million in computers and electronics to the United Kingdom, $218 million in machinery to Belgium. The list is long: chemicals, fabricated metals, transportation equipment — it goes on and on like that.

Of the fasted-growing country markets for Minnesota exports in 2010, three were European Union members. Growth in Hungary and Poland was driven by computers and electronics. In Finland, the growth area was transportation equipment.

If they are worried over at the Minnesota Trade Office, nobody is saying. “We are not expecting any major change to Minnesota exports,” says Executive Director Katie Clark. “Greece is our 66th largest export market and exports to the European Union accounts for only 20 percent of our total.”

Still, she says, they are watching carefully, and there is a teaching moment in all of this for small- to mid-sized businesses. “We encourage people to export in multiple markets,” she says. “Only 1 percent of companies across the United States export. Of them, 58 percent of them export to just one country. Canada is Minnesota’s largest market — larger than the next four on the list — and luckily Canada is pretty stable.” But if some reason that were to change, a lot of Minnesota companies would be in trouble. 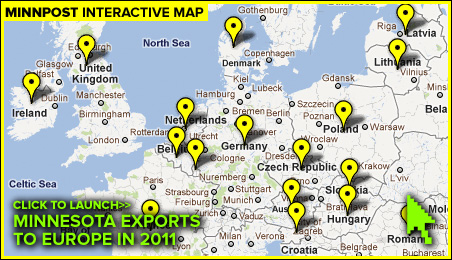