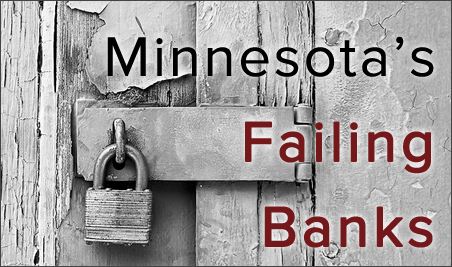 Failed banks have become the stuff of Great Recession lore. They got too close to the toxic assets game and went under. Surely we’re coming out of that mess now, right? A quick glance at the failed bank count for Minnesota would suggest that we are. So far in 2011, just two Minnesota’s banks have failed. Last year by this time there had been seven failed banks.

Other data from the Minnesota Department of Commerce tells a different story. They keep a watch list of problem banks, and the number of banks on that list are at a record high.

These were typically not banks dealing closely in the bad mortgages that got us into this recession. They dealt mostly with the developers building the houses that would eventually be attached to bad mortgages.

Maybe they would make a loan to a real estate developer who would use the money to buy a parcel of land and divide it up. Those parcels may have been valued at $80,000 when the money was handed out, but worth just $30,000 now. The big banks struggled with this sort of thing and mostly made it out alive. The smaller banks haven’t been so lucky.

After the subprime mortgage tsunami, of course, came unemployment and, for many, a drop in deposits.

River Bank in Wyoming, Minn., was the latest bank failure in the state to fail, and the 75th to fail nationwide this year. It went down with $417 million in assets and just $379 million in deposits — a gap of close to $40 million, the largest gap of the banks that have failed in Minnesota since the economy tanked.

Should we be worried? Predicting what will happen next is impossible. The FDIC keeps its own list of problem banks, and that number went down by 23 banks in the 4th Quarter, from 888 to 865. The Minnesota list is a bit more broad, but not by much.

We’ve posted something of an autopsy of Minnesota’s failed banks. Click on a bank near where you live (they are scattered all over the state) and see how badly it failed.

See all of our data visualization projects at our new data and maps hub.