News
Learning Curve
MinnPost’s education reporting is made possible by a grant from the Bush Foundation.
Nov. 30, 2010

At both the national and local levels, white high-school graduates are still much more likely to enroll in college — and to go on to graduate again — than minorities. Just like their K-12 school-reform counterparts, higher-ed policymakers are feverishly comparing notes about what works to increase diversity on campus, and what can be replicated elsewhere.

They’d do well to pay a little attention to some Minnesota success stories. For almost the tenth consecutive year the number of minorities enrolled in the 17 four-year, liberal arts schools that belong to the Minnesota Private College Council has increased [PDF]. This year, 17 percent of incoming freshmen statewide are minorities, as are nearly 23 percent of transfers.

That’s an increase of more than 112 percent over the last decade. The number of Latino students entering has increased an eye-popping 143 percent, while African-American enrollment is up almost 107 percent. And — just as crucial — the colleges are retaining more minorities from one year to the next. 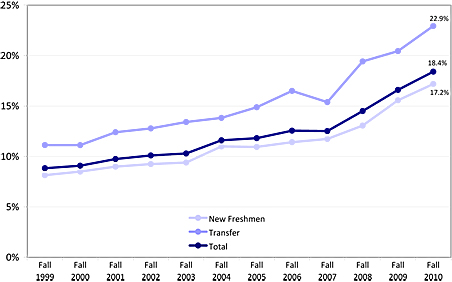 So what’s going right? No one thing, according to administrators at some of the most successful schools. The growth is the result of some very deliberate efforts to recruit students of color, to make campuses welcoming places.

Making college a welcoming place
“It’s a combination of a lot of different programs,” explained Chuayi Yang, assistant director of the Multicultural Programs and Services Office at St. Catherine University. “It’s important to feel like you’re part of the community right away, and throughout your whole first year.”

Last year, 37 percent of St. Kate’s freshman class was minorities, as were 22 percent of transfer students. In particular, the university has seen a sharp uptick in enrollment by Hmong and African-American students.

Enrollment, it turns out, is only the very last step in the process. The first step toward creating a more diverse student body is to forge strong relationships in the community, said Brian Bruess, vice president for enrollment and student affairs at the St. Paul university. That means everything from looking for service-learning opportunities in communities of color to literally asking students of color what would make the environment more attractive to them.

In addition to adding a Hmong culture and language class to the schedule and making sure that program materials are translated into Hmong, St. Kate’s has made a special effort to include parents in the recruiting process.

“A majority are still first-generation,” said Yang. “Families are a huge part of the decision-making.”

A celebration to thank extended families
The college finds lots of ways to get extended families on campus. “The students in the Hmong course over the past two years have held a celebration for their families to show their appreciation for the sacrifices they’ve made to help the students attend,” said Ellen Richter-Norgel, director of student retention. “I’ve never experienced anything like it. It’s just amazing.”

At St. Kate’s, all minority freshmen get a peer mentor who helps them figure out everything from managing their schedule to how to fit in on campus. When they return as sophomores — and a whopping 90 percent do — more than half take on their own leadership roles.

Because money is often a barrier to retention, St. Kate’s also offers a financial literacy program including a host of workshops on everything from financial aid to budgeting. The school asked Lutheran Social Services to provide a debt counselor to meet with students on campus.

At Augsburg College in Minneapolis, 39 percent of this year’s freshman class is minority and 86 percent of last year’s incoming students of color are back.

Several years ago, the college began paying close attention to state demographic forecasts. At the same time the number of high-school graduates in Minnesota has been declining, the ranks of those earning a diploma has become more diverse.

The Augsburg community responded on several levels, according to Julie Edstrom, vice president for enrollment management. While a faculty group began looking at the diversity of the college’s curriculum, the enrollment staff investigated what it would take to reach out to nontraditional students.

Diversifying staff
Their first step was to diversify their own ranks, which instantly brought fresh perspectives on what potential recruits viewed as barriers. Augsburg also engaged staff in cultural competency programming, which got the entire campus involved in the effort.

In the past, students didn’t get hard and fast information about financial aid until they were months into the enrollment process. This meant Augsburg might never hear from students who assumed tuition was unaffordable and lost others who became discouraged at the lag time.

The solution: Put some seed money on the table. The college created scholarships for participants in a host of college-readiness programs operated by groups like Admission Possible and AchieveMpls.

Augsburg has long recruited from community colleges, which tend to be more diverse, but has deepened its partnerships with Minneapolis Community and Technical College. The college also beefed up academic-support services to make sure students aren’t struggling to keep up.

“It’s tough when you’re a person of color and you come to visit a college and the brochures have pictures of people who are very diverse, but you look around campus and say, ‘Where is all that diversity?’” said Edstrom.

“If I’m a prospective student and I’m walking on campus, seeing students like me is critical,” agreed St. Kate’s Richter-Norgel. “It tells me I’m going to be at home.”