News
Learning Curve
MinnPost's education reporting is made possible by a grant from the Bush Foundation.
Nov. 23, 2010 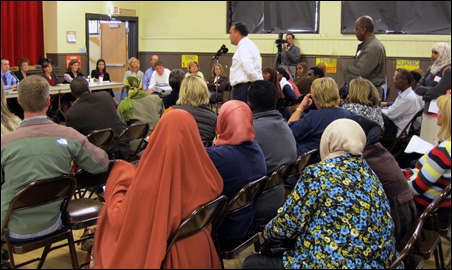 In 1998, almost two decades after he immigrated to the United States to attend college, Ahmed Jama moved to Eden Prairie for the same reason many people do. Jama and his wife were starting a family and wanted to live in a community with good schools. So far, the experiences of their son and two daughters have borne out the district’s glowing reputation.

About five years ago, Jama got more involved in the southwest suburb’s Somali community. In the process, he realized his family’s experience wasn’t representative of Eden Prairie’s growing immigrant population. Other families, he learned, were struggling with the language barrier.

“Kids who were just learning English would then go home and their parents couldn’t help,” he said. “Not only were they behind in the classroom, they were behind at home.”

The Somali community had ideas for things that would help, including after-hours homework help centers and other tools that never seemed to be in the budget. Jama was convinced administrators he and others met with were blowing them off.

“I know now why they were dragging their feet,” he said yesterday, on the eve of a school board meeting that threatens to be one of the most contentious in recent Minnesota history. Dozens of parents angry over proposed changes to attendance boundaries are expected to pack the meeting; if it’s anything like past meetings on the topic, the hottest item on the agenda will be race.

A reconfiguration plan to resolve problems
At the direction of the school board, in recent months Eden Prairie administrators have been working on a plan to reconfigure the district’s schools to resolve a number of problems. At the moment, Eden Prairie has five K-4 elementary schools, including a Spanish immersion magnet, one “intermediate” school serving grades 5 and 6, a middle school and a high school.

One of the metro area’s most affluent, the district serves 9,700 students. The district has grown quickly but unevenly over the last two decades, leaving some schools overpopulated and some underused. Administrators needed to create a new elementary school, find more space for preschoolers and grapple with a persistent dip in test scores in fifth grade.

At the same time, there were dramatic differences in the number of poor students from one elementary school to another. Because in Minnesota the percentage of students receiving free and reduced-price lunches more or less correlates to the number of minorities, that meant the schools were becoming more segregated.

In their elementary years, Jama’s children attended Prairie View Elementary, on the city’s northwest side, where currently 13 percent of students live in poverty and 10 percent are learning English. Test scores are high.

But across the suburb to the east, at Forest Hills, 46 percent of students are impoverished and 19 percent are learning English. Test scores are lower.

Changing demographics in district
Ten years ago, 90 percent of district students were white, with Asian-Americans and Pacific Islanders making up another 5 percent. Today, white pupils account for 75 percent of the student body, Asians 10 percent, and African-Americans 11 percent. These charts [PDF] show the district’s demographic changes.

The racial disparity among the schools is within five percentage points of the ratio where a state law would require the district to create a desegregation plan. And three schools — Forest Hills and the intermediate and middle schools — are not making adequate yearly progress toward closing the achievement gap, according to federally mandated testing.

In February, the seven-member board instructed Superintendent Melissa Krull to come up with a plan to be implemented in September 2011. She handed the task of drawing a new map, taking all of the issues into account, over to a citizen committee. 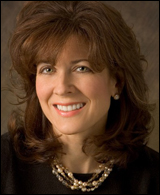 Meeting over the summer, the group came up with a plan to redistribute all fifth- and sixth-graders among existing K-4 schools, open a fifth K-6 school in the vacated building and redraw the attendance map in a way that brought the percentage of impoverished students in each under 20 percent. The plan affects some 1,100 students; some who currently walk to school will ride a bus.

Studies have repeatedly shown that student performance is significantly better at schools where a majority of students are middle class. Many districts nationwide have seen improvement on test scores when school boundaries are drawn for socioeconomic balance.

From Bearpath to Forest Hills
Understandably, school boundary changes are always tense. Indeed, lots of people decide to buy a house based on the school they want their kids to attend. But one more detail made Eden Prairie’s proposal particularly controversial: Some of the kids who will now ride buses will catch them in one of the Twin Cities’ wealthiest neighborhoods, the gated community of Bearpath. The school where the bus will deposit them: Forest Hills.

The drum beat of opposition started almost as soon as the board directed Krull to begin planning the reconfiguration. Parents began discussing the likely changes on Facebook, and on a website for those “fighting to keep neighborhood schools in the neighborhood.”

By the time the superintendent presented the plan to the public at seven different community meetings attended by some 700 people this fall, tempers had flared.

“The input sessions started out hostile,” said Krull. “People have been booed and shouted down. We’ve had police at all of those meetings.”

Jama was one of those jeered at a recent forum. “For 12 years these kids have been suffering,” he said when his turn at the microphone came. “We hold [the board] accountable for providing an equitable education and yet we criticize them when they do something.”

“Do you work for the schools?” shouted a woman in the rear of the room.

“All civility went out the window,” said Jama. “They were just throwing their weight around.”

Angry community members accused the district of engaging in social engineering, causing unnecessary divisiveness and driving needed volunteers out of schools. One angry woman was asked to leave the podium after suggesting Krull and two board members, who are white, of having “conflicts of interest” for having relatives who are minorities.

A number of people suggested leaving attendance boundaries where they are and moving the Spanish immersion program to Forest Hills to make it more attractive to affluent families from other parts of the suburb. According to board Vice-Chair Carol Bomben, there isn’t enough room at Forest Hills to accommodate the program, and even if there were it wouldn’t solve the other issues. 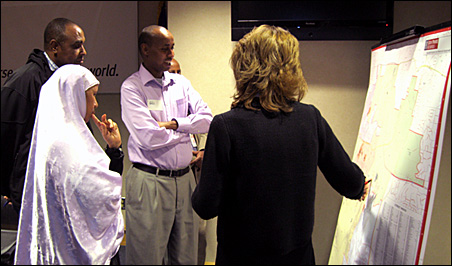 “If we don’t address those issues and balance our schools, it’s just going to become a bigger and bigger problem as time goes on,” she said.

Others expressed concern that having a single high-poverty school can have larger negative ramifications for the community. If affluent families stop moving in, the concentration of struggling students is likely to mushroom, said Krull and others.

Indeed, friends of the Eden Prairie School Board Accountability Facebook page have made oblique mentions of a “little brown island” and have posted an anonymously authored study lambasting district leaders.

Eden Prairie is far from the first Twin Cities suburb to grapple with intra-district desegregation in recent years. (For a detailed look at suburban “resegregation,” check out MinnPost’s past series on the problem here.) Hopkins, St. Louis Park, Burnsville-Eagan-Savage, Osseo, Robbinsdale and Roseville have struggled to balance attendance areas.

Minnesota’s strong open-enrollment laws allow parents to move their children into a school outside their home district, provided that school has space and the family can provide transportation. A number of families unhappy with boundary changes in Hopkins and Osseo moved their kids — and the state dollars that follow them — to Minnetonka.

A Minnetonka official told the Eden Prairie News that the district has received inquiries from some 50 Eden Prairie families so far.

“The bottom line is that parents can decide where they want to send their kids to school,” said Croonquist.

If tonight’s meeting is anything like the ones that preceded it, angry speakers will call for Krull’s resignation and demand that the board table the plan until a new board “that reflects the community” can be elected. At the moment, Krull has the authority to implement the plan, although it’s possible the board could reverse itself and take that power back from her.

And three board members could be unseated in the next election a year from now, added Bomben, but right now Krull isn’t likely to be fired.

“At this stage in terms of the contract she couldn’t be, unless it was by mutual agreement,” Bomben said. “They’d have to fire her for cause, and it’s not there in my view.”

Jama, for one, wants Krull and the board to keep marching forward.

“She is not a politician, she is an educator and she saw a lot of kids with needs that were not being met and she tried to do something about it,” he said. “She’s a hero in my book.”