News
Learning Curve
MinnPost’s education reporting is made possible by a grant from the Bush Foundation.
Nov. 17, 2010 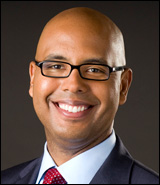 In June, the members of Urban Prep Academy’s first senior class gathered for an unusual ritual. One by one, all 150 donned baseball caps from the four-year colleges and universities that had accepted them.

It’s a feat virtually any school would boast about, but Urban Prep had more reason than most: All of the Chicago charter school’s students are African-American boys, and 85 percent come from impoverished homes. They succeed in part because of a strong culture that places an emphasis on teamwork and discipline. All students wear blazers and ties and are addressed as “mister.”

The school is the creation of Chicago native Tim King, who is the featured speaker at the Minnesota Minority Education Partnership’s 2010 conference on racial equity. The meeting, which takes place Thursday in Minneapolis, is sold out, but King took time earlier this week to describe his work to MinnPost. An edited version of that conversation follows:

MinnPost: How did you come to this work?

Tim King: While I was in law school at Georgetown, a former professor of mine became the head of an inner-city school in Washington, D.C., and asked if I would have time to teach a history class. I taught the class and absolutely fell in love with teaching and the kids and the school and everything. Much to my parents’ dismay, I ended up becoming a full-time teacher and a part-time law student.

The experience really opened my eyes to the issues facing us in this country as it relates to urban education. I moved back to Chicago and I became the head of an all-boys independent school in Chicago. I wanted to figure out how to translate the experience of the students we had at that school into a public-school setting. It felt very wrong to me that families of means had choices, and families who didn’t have those resources had to settle for whatever district school was available to them.

So I went about trying to figure out how to start a charter school that would allow students to have a high-quality, college-prep education in a structured, disciplined environment and they wouldn’t have to pay for it. That’s how Urban Prep was born. We opened our first school — the country’s first all-boys charter public high school — in 2006. Now we have three.

MP: What’s important about single-gender education in this instance?

TK: The reason Urban Prep is a single-gender school has less to do with our believing that it’s a panacea, the solution, and more to do with making sure that there are high-quality options and choices that meet the needs of young people in our communities. With that said, I do think that there are benefits to having a single-gender school, an all-boys school in particular. They include an ability to really focus your learning and instruction on the learning styles and needs of boys, which do differ from girls in some ways. You have the same benefit in an all-girls school.

I’ll give you an example. We know that in the city of Chicago, boys lag woefully behind in English and reading when compared to girls. One of the things we’re able to do at Urban Prep is we can target our instruction around literacy and the language arts and do that in a way that benefits our students.

This is the reason why many all-girls public schools that have popped up across the country have a math and science focus — because girls lag behind boys in math and science.

There are also other elements that you can bring to the table based on brain research and how boys and girls learn. I don’t completely buy in to all of it, but certainly we have found that the research out there showing that boys learn better in kinesthetic, active environments seems to have played out at Urban Prep. So we try to make sure that our classrooms are active and interactive and that our students are engaged. Our students are responding very positively to that.

This guy, his father had died of a drug overdose when he was a young child. He was not used to having a male authority figure. We really had to work hard with this young man to build a relationship with him that was going to result in him being able to have a positive experience at Urban Prep and also have a positive self-image and ability to interact positively with a wide variety of people.

Our school culture is based on four important elements: respect, responsibility, ritual and relationships. On the respect front, we want to make sure that our students feel respected, have a level of self-respect and can respect other people. So we refer to our students by their last names.

We create this environment in which an adult is saying to a student, “Mr. Smith …” “Mr. Jones …” and there’s automatically this sense of respect.  “Oh, this adult really respects me in a different way.” It allows the student to look differently upon himself and the people around him.

Responsibility: We’ve got very clear code of conduct, a student uniform that includes a jacket and tie. Students take responsibility for their education and they take it seriously.

Rituals: We have a series of rituals that really make students feel like they’re part of something special.  We start our school day every morning with something we call “community,” which is an all-school assembly.  We have several activities throughout the course of the school year, rituals that create that bond among our students.

And then finally, relationships: Building these positive relationships between the adults and the students within the schools is key in ensuring that the students have a level of success. That speaks to your point that you made regarding the male role model piece.

MP: You have a very low student-to-teacher ratio, 13:1. How are you able to do that?

TK: It all boils down to money. This year, we’ll raise about $1.7 million to support the operation of our network. We feel the programs we have in place, our extended school day, our smaller classrooms, our low student-to-teacher ratio, our summer programs — all of the things that we do are important. If we did not have that outside support through very generous donors we would not be able to do what we are doing.

MP: When last year’s class entered four years earlier, only 4 percent read at grade level?How do you get more than a year of learning into each kid?

TK: We’re only able to do it because of our status as a charter school. We can have an extended school year and an extended school day. Our students are in school from 8 a.m. to 4 p.m. every day.  We have after-school tutoring until 6:00 and we have Saturday school. And our students start in August. By the time a student is finished at Urban Prep, they will have the equivalent of five years of traditional public school time during their four years.

MP: Critics note that not all of your students make it through all four years.

The important point on that criticism that people often miss is it’s not about how many students come and finish. It’s about how many students a school expels or puts out. At Urban Prep we are firm, firm believers in not throwing kids away. We look really hard with even the most challenging discipline issues and students to make sure that those students are able to stay.  In this graduating class [of 150] there were three students who were expelled from that class. Those were instances where we had to, by law, expel them.

TK: Elements of building a positive school culture within a school are certainly replicable. When we say our school culture is based on respect, ritual, responsibility and relationships, I don’t think that that’s anything new.

Some of our rituals are easily replicable and would be incredibly valuable. We have a school creed that our students recite every day. The third line in the school creed is, we are college bound. I think that the fact that you’ve got students every year for four years saying those words, at some point it sinks in.

When a student at Urban Prep gets admitted to college, we trade that student’s red tie for a red-and-gold tie. You know, these guys absolutely love getting their red-and-gold ties. So there’s a competition that’s been created within our school, that our students have created themselves: “You haven’t gotten your tie yet? Man, you better get on it.”

This is one of the reasons why you have such a struggle with turnaround schools, because every place has a culture. The problem is the culture may not be a positive one or may not be an effective one when it comes to student learning. When you go into a school that has a negative culture, it’s really tough to turn that around. I would say it’s tougher to do that than it is to start from scratch. However, it’s not impossible.

What works at Chicago’s all-boys Urban Prep? A Q&A with Tim King