News
Learning Curve
MinnPost’s education reporting is made possible by a grant from the Bush Foundation.
Jan. 20, 2011 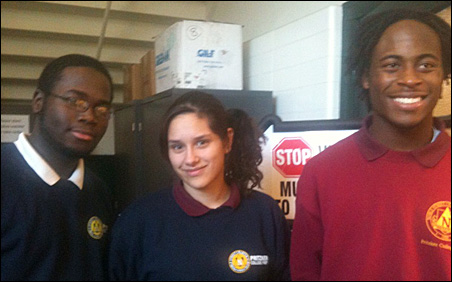 CHICAGO — Seconds after Pablo Sierra knocked on the door of Laura Rincon’s classroom, a freshman named Anna stepped into the hall, smiled shyly and extended a hand to the principal.

“We’re learning how to improve our English composition,” she offered without prompting. “We’re working on our comma rules. Do you have any questions?”

Ms. Rincon’s unannounced visitors did, and after ably fielding each, Anna ushered them into a sunny, technology-packed room on the second floor of a remodeled parochial school. Inside, students were deciding how many commas to insert into a series of sentences and why.

At Pritzker College Prep, a charter high school located in a blue-collar neighborhood in northwestern Chicago, every class has a designated greeter. The duty rotates from one student to another. Whoever has the job is expected to be able to explain at any moment what the class is working on and where in the lesson plan they are.

As words appeared on a screen at the front of the room, Rincon moved around the room asking kids about the relationship between the different clauses in the sentences. As she talked, the teacher raised and lowered the volume of her voice and punctuated her points with theatrical body language.

Daydreaming unlikely
Even if students weren’t simultaneously recording their answers on individual electronic clickers, it’s unlikely any could fall to daydreaming. At Pritzker, the rule is everyone sits up straight and keeps their eyes on the front of the room while lessons are under way.

“What makes this kind of teaching possible is high behavioral standards,” said Sierra. “The onus of the learning is on the child. The teacher’s job is to deliver rigorous, effective instruction. But the child’s job is to learn and to demonstrate what they have learned.”

At Pritzker, the equation adds up to academic excellence. Fully 95 percent of the African-American and Latino students are poor. None has a parent who went to college, yet every member of last year’s senior class was accepted at one or more four-year colleges; an eye-popping 90 percent matriculated.

Students are chosen by lottery, and there are at least two applicants for every seat. Demand is so high that Sierra has found a way to wedge 700 students into a building meant to accommodate 500.

Each detail is the result of deliberate thought
Academics are rigorous, teachers have special training, and kids are in school more hours than their mainline pubic-school counterparts. But Sierra attributes 80 percent of the school’s success to its distinctive, disciplined culture. Every detail, from the level of noise allowed in the hall between classes to the “7 Habits of Successful Teens” posters in each classroom, is the result of deliberate thought.

“It runs so smoothly because everyone has to follow the same rules,” said senior Michelle Ramos, who has applied to 21 colleges and hopes to study aerospace engineering. “You know no one is going to be a distraction or get out of line.”

There’s general agreement among education reformers that when schools “beat the odds” on closing the achievement gap, a strong culture is virtually always a key factor. Yet few seem to have had success replicating a culture that works in one building in other schools.

But the nine other charter schools that make up Chicago’s Noble Network all achieve the same impressive results as Pritzker. In fact, Sierra and his colleagues are so confident they can create a setting that enables success that they are in the process of preparing to open three schools outside of Chicago, two in Minneapolis and one in New Orleans.

Opening pushed back a year
The Minneapolis College Prep high school was originally slated to open on the city’s north side next fall. Organizers this week announced plans to push the opening back a year, however, citing a desire to have stronger community partnerships in place before opening.

“Far too often charters try to open before they are ready and live to regret moving ahead prematurely,” said board chair Russ Mosley. “We are going to do this right.”

The high school will be the first charter sponsored by Minneapolis Public Schools. Organizers plan to create a second program in south Minneapolis.

Noble agreed to be involved in the out-of-state startups only because administrators were assured they would have enough autonomy and control to structure things exactly the way they want.

The first two years a student spends at a Noble school aren’t entirely unlike boot camp, Sierra explained. On the first day of school, students are given a crash course in expectations, including an overview of a very strict demerit policy. Each demerit brings a $5 fine; 12 add up to a ticket to summer school.

Structure emphasized
In the upper left hand corner of the whiteboard in each every classroom teachers write the same information about the class, behavioral expectations and the day’s lesson. They also post instructions for exercises students should start on while they’re waiting for the class to get started, as well as a question or mini-quiz to be answered on the way out.

Much like picking a greeter and cold-calling students instead of waiting for them to raise a hand, these seemingly small details do two things, Sierra explained. They keep kids engaged and they set the tone. Eventually, getting good grades and starting to talk about college becomes cool, but during those first couple of years the structure provides external motivation to acculturate.

“The first day of school, Mr. Sierra stood above us and asked, ‘What’s your goal?’” recalled senior Patrick Murphy. “We stared at him with blank faces. And he said, ‘Your goal is to graduate from college.’ And we repeated it over and over. It didn’t have meaning then, but now it does.”

To drive home that message, the walls in Pritzker’s common spaces are lined with college pennants. Special displays show pennants from schools attended by alumni. There are lots from historically black colleges and universities that are very hard to get into.

Right now, Sierra is trying to persuade the parents of a female student who won a full scholarship to Columbia on early admissions to let her go. Latino families often want girls to stay close to home.

Murphy said he is more likely to end up at an Illinois program, but he’s anxious to see his pennant up on the wall all the same. Before he started at Pritzker, his main concerns were football and his social life. He still plays football, but also maintains a GPA of 3.5.

Some transfer; few expelled
Some students do choose to transfer out, but Sierra and his staff work hard to help the ones who choose to stay. In five years, he has expelled just three kids.

Student progress is closely tracked so that gaps in learning can be plugged before kids fall behind. To that end, every student takes a formative assessment every two weeks. Report cards go home afterward and must come back signed by a parent. Summer school and night school may be required for kids who need more help.

At the door to their classrooms, next to their name, every teacher’s alma mater is listed. Most are veterans of Teach for America, the New Teacher Project or another alternative teacher-training program. Their compensation is based in part on student achievement.

Sierra would like more teachers of color, and in particular male ones, but his faculty currently is heavy on young white women.

When sophomore Dennis Sykes enrolled in Pritzker, friends from his old school pitied him. “At first when you come here you say, ‘I can’t believe they’re making me do this,’ ” he said. “But now I kind of feel sorry for them.”

Goals are clear early on
Even as freshmen, Pritzker students know what their pre-ACT score is and where it needs to be to get into college. When one of his buddies recently bragged about his score, Sykes bit his tongue.

Sykes would like to go to a college in Boston, New York or Hawaii — “anywhere but Chicago.”

“These four years may seem like they’re going to be long, but they go by so fast,” said Sykes.

“They’re really fast,” Murphy concurred. “If every school was more like Noble and had the expectations we have, it would be so much better for the kids.”