News
Learning Curve
MinnPost’s education reporting is made possible by a grant from the Bush Foundation.
March 2, 2011 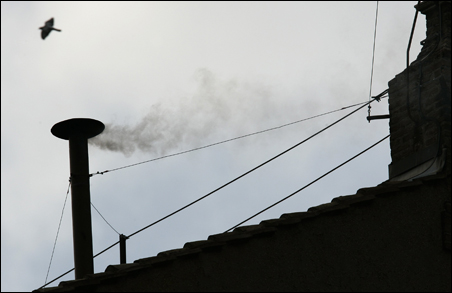 REUTERS/Jerry Lampen
‘White smoke’: A wag’s apt metaphor for Monday’s news of an end to Dayton’s stalemate with the Legislature over alternative teacher licensing.

On Monday, an e-mail landed in my inbox containing a photo of a wisp of steam emanating from a slender pipe atop the roof of the Sistine Chapel at the Vatican. The accompanying explanation, penned by a wag at the nonprofit Charter School Partners: “White smoke from the Capitol.”

Would that all press releases were so economically worded, and yet so spot on.

The image’s they’ve-come-to-an-agreement sentiment was apt. Earlier in the day, Gov. Mark Dayton announced he had reached a compromise with lawmakers over a bill allowing the licensing of nontraditional teacher candidates.

The deal ended a two-week-long stalemate over an education reform that enjoyed near-universal support at the start of the legislative session, only to end up tabled by its authors when the governor asked for changes they felt would gut it.

The wins
The win for Dayton: Candidates for alternative certification will have to pass the same “rigorous and subject-specific content examination” as other Minnesota license-holders, hopefully ensuring they are as qualified to enter the classroom.

The win for the bill’s supporters in the Legislature: The new training programs will not be required to operate under the watch of the state’s traditional teacher colleges, only to exchange information once a year about best practices.

In theory, anyway, there was no win for the state’s largest teacher’s union, Education Minnesota, which reportedly urged its members to press the governor for a veto — compromise notwithstanding.

The win for struggling students: Alternative certification — or alt cert, in the argot of policymakers — is designed to increase the number of minorities, career-changers and teachers with specialized training in instructional strategies to close the achievement gap. It is a key part of President Barack Obama’s education policy.

Differences over results
Proponents say evidence is mounting that states with good alternative certification laws see increases in test scores as well as more minority teachers and more of the best and the brightest.

Additionally, many of the handful of Twin Cities schools with high poverty rates and high test scores — so-called beat-the-odds schools — are staffed by teachers trained by Teach for America (TFA), The New Teacher Project and other alternative certification programs.

Critics, including leaders at Education Minnesota and some of the state’s traditional teacher colleges, argue the opposite, insisting that schools staffed by alternative license holders do not post higher test scores. Beyond that, they say, TFA teachers are expensive and frequently leave after just a couple of years on the job.

Adding to the debate, there are states where alternative certification arguably has ushered in a race to the bottom in terms of teacher quality.

Liberals divided
Finally, because alternative certification has been sought by racial minority groups advocating for education reform, the issue has divided political liberals into uncomfortable camps. Plenty of Twin Cities education activists describe themselves as both pro-labor and pro-reform.

White smoke notwithstanding, it’s safe to argue that no matter where one stands on alternative certification, we’re not looking at regime change so much as the addition of a new item to the state’s education reform toolkit.

More interesting, perhaps, are any smoke signals the deal sends about Dayton as a politician who turns out not to be terribly political.

At least in terms of education policy, the deal seems to continue to bolster Dayton’s image as a DFLer who appears to be willing to go to the mat to protect the right to collective bargaining yet isn’t terribly concerned about crossing organized labor.

Early concessions
It’s unusual for a governor to make dramatic concessions so early in the legislative session. Many of Dayton’s predecessors held out for the 11th hour, often in the hope of wresting concessions from lawmakers elsewhere. Indeed, last year’s Legislature deadlocked so badly over alt cert and virtually every other significant education reform that it adjourned without passing an omnibus education bill.

Dayton, by contrast, doesn’t seem concerned about re-election. “He’s not thinking about his next career,” said Bernie Hesse of the United Foods and Commercial Workers. “He’s gonna fix a lot of structural stuff. He’s gonna piss off a lot of his friends, even. And he’s gonna be provocative in terms of talking about revenue.”

Indeed, the seven-point education plan Dayton released last month was noticeably lacking in crowd-pleasing promises and catchy packaging and long on badly needed but decidedly unsexy structural fixes that won’t pay off during the governor’s term.

Education Minnesota, it’s worth noting, endorsed Dayton during last year’s gubernatorial contest — but he wasn’t their first choice. Similarly, both as a candidate and a newly sworn-in governor, Dayton has been clear that he expects union concessions on initiatives designed to close the achievement gap.

The union may not like it, one policymaker quipped yesterday, “But the teachers can’t exactly flee to the Republicans.”

And yet even as the governor and his education commissioner were drafting their correspondence to lawmakers, Dayton was rallying with workers protesting Wisconsin Gov. Scott Walker’s assault on unions. Walker’s attempt to “force ‘extreme, drastic measures’ on working people won’t become law in MN ‘because I’m here,’ ” the governor tweeted.

Signs from the governor
In Hess’ view, one of the clearest signs from Dayton so far was his re-appointment of Ken Peterson, labor commissioner during the Rudy Perpich era, to helm the Department of Labor and Industry. Dayton, he speculated, will hold firm on things like prevailing wages, preserving teachers’ right to strike and not allowing Minnesota to become a right-to-work state.

“He really gets what working people are going through right now,” said Hesse. “The door’s open at the governor’s office. It’s been a long time since we’ve had that.”

By comparison, alternative certification seems like pretty small potatoes, other Capitol-watchers have noted. It’s not even the toughest education reform Dayton and lawmakers will need to agree on this term.

Yet to take center stage: Tenure reform and whether state law should allow teacher effectiveness to be a factor in layoffs — a virtual certainty during the next biennium. Tackling those issues will doubtless require more compromise than alt cert.

Alternative teachers and ‘white smoke’: What does Dayton’s deal signal?