News
Learning Curve
MinnPost’s education reporting is made possible by a grant from the Bush Foundation.
April 11, 2011 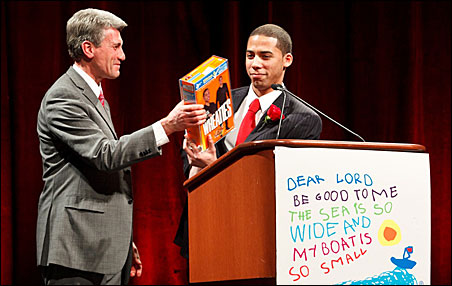 Courtesy of Minneapolis Public Schools
Mayor R.T. Rybak and Alexander Glaze at the Beat the Odds awards event in March.

On Friday afternoon, Southwest High School senior Alex Glaze was waiting to hear whether he would receive a Gates Millennium Scholarship. He’s a finalist for the prestigious award, which would cover the costs of his post-secondary education wherever he chooses to go for as long as he stays in school.

Next fall that will be Stanford University, where Glaze plans to take his time choosing a course of study. After that, maybe law school, maybe another graduate program.

Think his are pie-in-the-sky odds? Sure, but when you hear where Glaze is headed and what he has overcome so far, you’ll want to call Bill and Melinda and suggest that if they haven’t already earmarked one of this year’s 1,000 scholarships for him, they’ll have some explaining to do.

Glaze started worked to support himself and his twin sister when he was 15, first at McDonalds and then at Nickelodeon Universe. He didn’t have much choice: The two were removed from the care of their mother when they were 8; they were in ninth grade when she died.

“Although my mother was an addict,” Glaze said. “She supplied me with more love and care than I could have asked for.”

They went to live with their father, who was largely indifferent and eventually kicked them out. After that, a family friend took them in. “Me and my sister pacted together,” he recalled.

“I just knew I had the potential. I knew through hard work I could do it,” he said. “I knew a couple of people at Southwest and I knew it was a good school.”

Once there, Glaze dug in. He enrolled in as many IB and Advanced Placement classes as he could and maintained a 3.5 grade point average. Instead of playing football and basketball, which he loves, he went to work after school.

“The day after his mother died, he came to school,” recalled Mary Morseth, his school counselor. “His first-period teacher said, ‘Are you sure you want to be here?’ And he said, ‘I have to be here.’ ”

Because he is African-American, because he is the first in his family to attend a four-year college and because his part-time income was less than the federal poverty level, Glaze qualified to participate in Achievement Via Determination (AVID), a national program offered at Southwest. Along with Morseth and Danielle Jastrow, College & Career Center coordinator, the daily class helped him keep focused on college as a viable option.

After scoring an enviable 30 on the ACT, Glaze applied to Fordham, New York University, the University of Wisconsin Madison, Marquette and Harvard. Stanford was his first choice, partly for its weather and partly because since it was such a highly competitive school Glaze believed he would be enrolled with other students similarly dedicated to their educations.

He was surprised when he learned he had been accepted. “I had a gut feeling, but I didn’t really think it would happen,” he said.

The Children’s Defense Fund-Minnesota quickly came through with a $4,000 Beat the Odds scholarship and Glaze’s teachers are helping him find other sources of financial aid if Gates doesn’t come through.

But there was one more stumbling block: After having only each other to rely on, Glaze and his twin, who will attend Mankato State University, were reluctant to part. Morseth stepped in, volunteering to pay to fly Glaze’s sister to California sometime during the fall and him home for the holidays.

For most kids, the ability to make visits home are a given. Not Glaze. “He has no one who will do that,” said Morseth.

That problem resolved, other details fell into place. At a CDF banquet last month, Glaze accepted his scholarship from Minneapolis Mayor R.T. Rybak. His honor was so impressed that he got in touch afterward and asked Glaze to spend the summer as an intern in his office.

Glaze will visit Stanford in coming weeks to get the lay of the land, but he’s not worried. He has some interest in eventually going to law school, but plans to take his time declaring an undergraduate major. Right now, he’s just excited he’ll get the chance to explore the full range of liberal arts.

Morseth is going to miss him. “He is the most exceptional student I have had in 30 years in education,” she said. “I’m so happy for him that all his hard work is paying off. He deserves every bit of it.”