News
Learning Curve
MinnPost’s education reporting is made possible by a grant from the Bush Foundation.
April 28, 2011 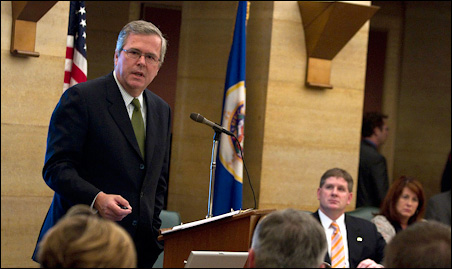 MinnPost photo by Terry Gydesen
Jeb Bush insists his push for online schooling is aimed at innovation, not cost-cutting.

Minnesota lawmakers Tuesday heard former Florida Gov. Jeb Bush describe a number of reforms undertaken during his tenure that he thinks Minnesota would be wise to emulate. Among other controversial moves, Bush advocated holding back third-graders who don’t pass state reading tests, rewarding teachers and schools that produce gains financially and pushing the school choice envelope by instituting vouchers.

Bush’s case, as reported in this space shortly after his remarks, wasn’t entirely airtight.

Nor was it what I was expecting. During the reporting I did before Bush’s visit, I turned up lots of material that suggests that the next stage of the former governor’s reform campaign will take place in cyberspace and will involve further privatization.

Companion bills now moving through the Florida Legislature would require — a key verb — students entering high school beginning next year to take at least one course online in order to graduate. They could do so either via the state-run Florida Virtual School or one of a number of new online schools the legislation would authorize.

According to the Miami Herald, the proposals would allow private companies to start and run virtual schools and charter schools — and not necessarily in Florida. The state would still have to approve the online provider, but teachers could be licensed in Florida, another state or by a national board.

The measure would do a few other things to expand the reach of online education, including for the first time allowing the full-time participation of elementary pupils and home-schooled children who have not previously attended a public school.

Bush mentioned this new initiative only tangentially Tuesday, but he did talk about the mistake he thought the Florida Supreme Court made in 2006 when it struck down his voucher program, which gave kids whose schools earned grades of F from the state rating system two years running scholarships to attend private schools.

Creating a market for private virtual schools would put some of the pressure back on, he explained in an interview published in the May 2011 issue of reason magazine: “Markets work and monopolies resist that.”

“If you’re a high school and you get $7,000 per student, you have six credits,” he added. “Divide by six, you would get $1,300. $1,300 for that geometry class split between the providers of the content, the classroom teacher and the administration around that teacher could easily be handled. It would create higher quality, huge-scale opportunities where you could lower costs.”

The former governor didn’t add this — he insists his push for online schooling is aimed at innovation, not cost-cutting — but it would also help end-run a reform he opposed: In 2002, Floridians voted to amend the state constitution to hold down class sizes, particularly in early years.

Handily, in response to my first story on Bush’s visit, staff at his Foundation for Excellence in Education yesterday e-mailed me a link to a year-old study that found the smaller classes did not lead to any gains in student achievement. There’s a free, lifetime subscription to MinnPost in it for anyone who wants to parse it for me.

They also challenged the high school graduation rate I reported Tuesday that put Minnesota far ahead of Florida, and supplied one showing Florida doing far better—some 13 percentage points–than Bush represented during his visit.

I’ve reported before in this space that graduation rates are among education’s squishiest statistics. Plus, some of the numbers they sent were from 2007, the year before the feds told the rest of the nation, essentially, to start using Minnesota’s more accurate method for tallying graduation rates.

(Side note to the foundation’s energetic public relations staff: When your founder has stood before God and country and proclaimed that your graduation rate “sucks,” it might be best to let those dogs sleep.)

But I digress. Back to the topic of privatization: As the Herald reported, even though the constitutional amendment directs the Florida Legislature to fund smaller classes, the reality is schools struggle to come up with the money. “When Miami-Dade and Broward could not meet class-size caps this year, schools steered students to virtual learning, with mixed results,” the paper reported.

Since there are no classrooms in cyberspace, there can’t be any caps, right?

One more choice line from the Herald report: “Students and their online teachers are supposed to speak by phone several times a month… and the school uses software to detect plagiarism.”

Do you suppose they might come up with one that would parse any statistic bandied about in an ideological setting? Just a thought.