News
Learning Curve
MinnPost’s education reporting is made possible by a grant from the Bush Foundation.
April 26, 2011 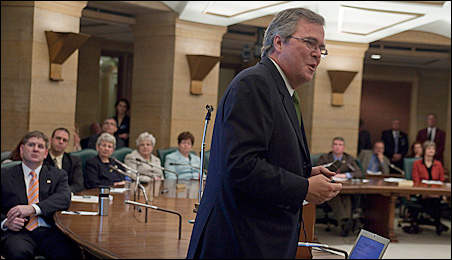 MinnPost photo by Terry Gydesen
Jeb Bush spent about an hour on Tuesday walking legislators through a presentation outlining his education efforts.

In terms of style, Jeb Bush, an invited legislative visitor today at the state Capitol, could not be less like his older brother.

The former Florida governor is funny, poised and speaks in complete sentences that make him seem simultaneously smart and self-effacing. His constituency has mushroomed since he left office three and a half years ago, and when his political bedfellows use the word “legacy” in conjunction with his name, it’s in the positive sense.

Lawmakers in Washington, D.C. are virtually unanimous in calling George W. Bush’s No Child Left Behind Act a wholesale failure. Jeb Bush, by contrast, is in hot demand among conservative education reformers who are seeding statehouses from coast to coast with copycat legislation.

Possibly most infuriating to the former president, if he’s watching: When confronted by bothersome questions about his record, Little Brother literally waves one hand, reasserts the truth as he sees it — and gets away with it.

This morning, as the ink was still drying on the first Bush reform bill filed in the Minnesota Legislature, the former governor testified before lawmakers at the request of Senate Majority Leader Amy Koch (R-Buffalo) and her counterpart, House Speaker Kurt Zellers, a Maple Grove Republican.

Bush rips Minnesota achievement gap
Minnesota may have a proud history of prioritizing education, he told lawmakers, but it’s doing a lousy job closing the achievement gap. They should consider enacting some of Florida’s education reforms, which include an end to social promotion, a school-grading system, financial incentives for schools and teachers, alternative teacher certification and vouchers.

Bush spent about an hour walking legislators through a PowerPoint presentation that outlined his education efforts and dramatic increases in student test scores between 1999, the year he took office, and 2009, two years after he left.

In 1998, for instance, 47 percent of Florida fourth-graders could not read at grade level. In 2009, 27 percent lagged behind. “This is because there was a concerted, long-term strategy,” he explained. “Our success is because of a whole suite of reforms.”

That suite included assigning schools A to F letter grades, “incentivizing” high expectations by paying bonuses to schools that better their grades and to teachers whose students pass Advanced Placement tests. Other changes include offering vouchers to kids whose schools earned an F two years in a row and holding back third-graders who did not pass state reading exams.

Bush told the lawmakers that he knew they were probably squeamish about this last item, the topic of the brand-new bill modeled on his reforms, but urged them to consider the evils of so-called social promotion.

“My personal opinion is that American kids are fine in terms of self-esteem,” he said. “I am not as worried about self-esteem as I am that they’re illiterate.”

Minnesota’s test scores, he warned, have been flat over the last 12 years while Florida’s have risen steadily.

DFLers find flaws with Florida results
After the hearing, DFL lawmakers hastened to point out that Bush’s presentation did not include slides detailing data that would have punctured his case. For example, he did not explain that some academic researchers have warned that Florida’s practice of holding back struggling third-graders taints its fourth-grade gains.

According to a Boston College researcher, Florida has been forcing unprecedented numbers of minority pupils to repeat third grade, on the order of 10 to 12 percent, meaning that fewer low-scoring students enter grade 4 at the normal age.

The same study found that two to three times as many minority children as white children are forced to repeat third grade, which likely explains the decrease in Florida’s race-based score gap.

Nor did Bush talk about the state’s abysmal eighth-grade test scores, which he proudly asserted were “about average” nationwide. He freely admitted Florida’s high school graduation rate of 67 percent “still sucks” but insisted it’s better than the 50 percent rate that prevailed when he was elected.

For the record, Minnesota’s 86 percent graduation rate is the nation’s third-highest; Florida ranks 44th. Minnesota tops the nation in ACT scores, while Florida comes in 25th.

Democrats also pointed out that Bush attributed some of his state’s success to reforms the Legislature’s current GOP leadership has torpedoed, including free, voluntary pre-K for all and a massive investment in early literacy instruction,

Bush had high praise for the Common Core Standards, a states-led initiative to ensure that academic achievement has the same definition everywhere. Several weeks ago, GOP legislative leaders inserted a provision in the Omnibus Education Finance Bill that would prevent Minnesota from adopting the standards, which they deem a step toward a “national curriculum.”

St. Paul Rep. Carlos Mariani, head of the DFL Education Reform Committee, noted that Bush also failed to mention a reform he opposed that could account for much of the progress: In 2002, Florida passed a constitutional amendment obliging the state legislature to provide funding to cap class-sizes at 18 students in pre-K through grade 3, 22 in grades 4 to 6 and 25 in grades 9 to 12.

Mariani called Bush’s appearance “a distraction” from issues that still loom large at the Capitol. “I just want to know when the Republicans are going to get serious,” he said. “It’s after break. When are they going to get to work?”

The GOP leaders who flanked Bush at the press conference that followed his testimony didn’t offer any comment on the contentious budget battle ahead, or the likelihood that, social promotion notwithstanding, their education package is headed for a veto.

“Gov. Bush took on the status quo,” Zellers said. “There was no political gain in it. He’s no longer governor. He’s not running for Senate. He’s just trying to help kids.”